Venus Beauty Institute, winner of many of this year’s César awards (the French equivalent of the Academy Awards), was recently shown at the West Newton Cinemas in conjunction with the gathering of the Key Sunday Cinema Club. The Cinema Club, which is featured in seven cities around the country, boasts a selection of independent and foreign releases for the consummate film fan. For a modest fee, fanatics are treated to a film months before its release in the States. Participants are unaware of the film selection prior to the screening, which heightens the excitement and feeling that one is watching something virtually untouched by the likes of myself—critics. Also featured is a guest speaker at each screening, usually a film theorist or historian, though directors such as Michael Moore and Frank Whaley have been known to impart their wisdom onto audiences in years past. The Cinema Club screens seven films over 14 weeks and has been accumulating members steadily since its inception in the Boston area. 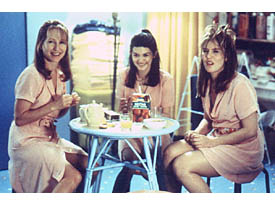 In mid-October, I encountered the Cinema Club armed with little but a tape recorder, determined to act less like a critic, and more like a fan. The discussion following the film was a mix of both critical and social assessments, as fans with keen eyes and ears provided an at-times lively and always interesting banter with Brittain Smith, the moderator and assistant professor of German and Comparative Literature at Boston University. He teaches courses on both German Cinema and film history, and is the manuscript editor for the journal Film Criticism. Smith proved to be an excellent guide to the film, providing the audience with insight and several well-founded observations about Venus Beauty Institute.

Directed by Tonie Marshall, Venus Beauty Institute is a glimpse into the lives of women who work at an upscale beauty parlor in Paris. At the center of the film is Angèle, a salon attendant who is in her early forties. Throughout the film, we witness Angèle’s struggle to erase her past, when she harmed a former lover, as she delves into several one-night stands, in the hopes of abolishing her anguish over her ability to inflict pain onto others. We meet Angèle as her attempts to maintain a sexual commitment with her current lover are thwarted. Antoine, a younger man who witnessed Angèle’s tearful parting with her lover, then approaches her. Antoine claims to have fallen in love with Angèle from afar, and it is only natural when she rebuffs his advances. As Antoine pursues Angèle with vigor, despite his engagement to another woman, we witness Angèle’s daily routine—complete with three very different coworkers: Marie, a young naïve flirt who begins a questionable relationship with a man twice her age, Samantha, a feisty underachiever who substitutes sexual companionship for love, and Nadine, the salon’s manager and matriarch. Through the massages, makeup applications, and layers of anti-aging cream, we see that the salon is quite unreal. That is, the women who work in the salon seem to disappear when they venture into the outside world. (This is punctuated by a tinkling of bells each time the door opens to the salon, which serves as an aural clue that the salon is an isolated entity.) The salon is an island of retreat, of fantasy, and of false impressions. Angèle must break through the walls of this mirage, and begin to navigate the waters of relationships without pretense, anguish, and guilt.

Director Tonie Marshall strikingly frames much of the action inside the glass walls of the salon. The figures inside the salon are rendered quite unreal by this visual effect, for they are literally always on display. These images of Angèle, Marie, Samantha, and Nadine framed by the glass enclosures are impressive—for these women are trapped inside structures of their own creation with seemingly impenetrable walls. The glass structures frame much of the action in the film (Angèle’s phone conversations with Antoine from several phone booths, the glass windows of Antoine’s car, and the windows of restaurants, to cite a few examples). Again, Marshall uses the seemingly impenetrable glass walls to illustrate several intertwining themes of voyeurism, desire, and appearance. 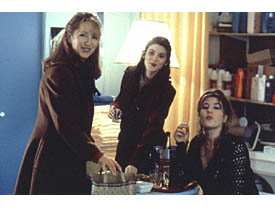 The theme of voyeurism is present from the opening shot. Here, the audience sees a woman, who we learn is Angèle, close up the salon for the evening. The sky is dark, but the shop is lit up like a stage, with Angèle as the star performer, as the audience waits, watching in the dark. Angèle steps outside to lock the door just as a bus passes in front of the store, obstructing our view. As the bus pulls away, Angèle has vanished, leaving us with only the brightly-lit salon in our view. As Angèle leaves the world of creams, potions, and seaweed wraps, she ceases to exist. She is lost within the dark and vast outside world.

Her navigation through the murky waters of this world consists of one-night stands and relationships highlighted only by their sexual content. This seems to change when Antoine approaches and then relentlessly pursues Angèle. The very notion of a stranger professing love from afar is one of the most often-used and exploited elements of romantic idealism and voyeurism. Antoine acts as a true voyeur as he spies on a heated discussion between Angèle and one of her lovers, and is thus propelled into a fantastic love that is as unreal as the world inside the glass walls of the salon.

The first physical contact between Antoine and Angèle even takes place in the salon. As Antoine makes an appointment for a massage, it is clear that their relationship (or what will develop into one) is housed within the glass walls of romantic idealism, literally inside the salon. As Angèle massages Antoine in a very sensual scene, they hear voices emitting from a nearby room. Angèle identifies the voices as those of Marie and an older gentleman, a retired pilot who is drawn to Marie’s childlike manner. For a few moments, Tonie Marshall hits upon another striking example of voyeurism—as Angèle tantalizes Antoine with an erotic massage, Marie and her lover provide the aural backdrop. It is as though an intimate conversation fuels the passion that is brewing between Antoine and Angèle. 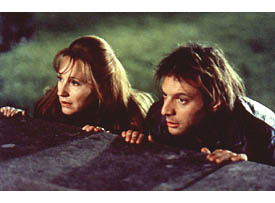 Later in the film, Angèle learns that Marie is to meet the pilot at his house. Thinking that Marie is in danger, Angèle arranges to spy on their date, with Antoine in tow. What ensues is one of the more visually arresting scenes in the film. We see Angèle and Antoine hide behind bushes outside the pilot’s house and, through large glass windows, watch them watch Marie and the pilot engage in a dance of seduction. Again, the theme of voyeurism is underlined, as Marie and the pilot are behind glass, literally on display. What is so noteworthy about this scene is that Angèle and Antoine are subsequently turned on by the erotic images before them. We watch as the pair engages in an intimate moment, which we infer to be brought on by the actions of Marie and her pilot.

What Marshall accomplishes so eloquently through this scene is the “desirability factor.” That is, what is true for Angèle and Antoine is true for some folks in reality—we rely, consciously and unconsciously, on outside images to dictate to us how and what to feel and how to act. Angèle and Antoine need Marie and the pilot’s display of eroticism to act upon their own romantic and erotic fantasies. This visualization leads us to Marshall’s grand point that images, as projected by film and television, feed our skewed ideas about romantic desire, love, and passion. It is the process of breaking through these glass walls that presents itself as a struggle for many searching for love or commitment. 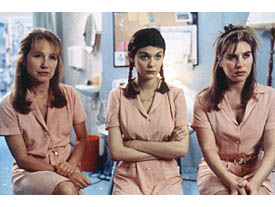 So, we must ask, is Angèle successful in her search? Does Antoine provide her with the love and security that she craves and needs? On the surface, Antoine forces Angèle to come to several very difficult realizations. As Angèle holds fast to her belief that “love is another form of slavery,” we see moments when she is close to breaking through, when she is almost willing to let herself go. But these moments are kept in check by the underlying presence of violence in Angèle’s life. We learn that, years ago, she scarred a former lover in a fit of jealous rage. This seems to mirror an incident in Angèle’s childhood when her mother shot her father and then herself. In one of the film’s late scenes, when Angèle is still unable to trust Antoine, she smashes the window of a phone booth, metaphorically trying to break the walls of her encasement. What is disturbing about this moment, as Angèle struggles with the process of freeing herself from the constraints of an unreal existence, is that her attempt at emancipation is punctuated by a violent act. These acts of violence are never fully addressed, as though they are natural speed bumps on the road to romantic fulfillment. This is a bit unsettling for the audience, as a final moment of violence skews the otherwise “happy ending” that closes the film.

Venus Beauty Institute is a fine effort by Tonie Marshall and is flawlessly acted by Nathalie Baye, Audrey Tautou (the César winner for Best Young Actress), Bulle Ogier, and Mathilde Seigner. The problems I had with the film are minor—the story does begin to drag around the halfway mark. I felt as though we simply couldn’t learn any more about these characters, as though Marshall’s message was conveyed best in the first half of the film. I certainly was not expecting (or hoping) for an action-driven film, which was convenient, since the majority of the action in Venus Beauty Institute is reaction. By this I mean, the actresses do a remarkable job of expressing their frustrations by engaging in “girl talk” between appointments, but cannot (and here, I mean Angèle most of all) find a place outside of the salon. The places they do find are alongside other people—Marie is a trophy for the wealthy pilot, just as Angèle is an ornament for Antoine. This point is made clear by Marshall’s quick and sure hand and is marked by a couple of key scenes. Most notably, after a sexual encounter with Angèle, Antoine casually offers to buy her a dress, in which she will look beautiful. Cut to a store, where Angèle is giddy with excitement at the prospect of pleasing her lover. This moment is interrupted by the shocking and unwanted presence of Antoine’s now ex-fiancee. The appearance of the ex-fiancee steers the relationship between Antoine and Angèle into troubled waters, even though Angèle covers her ears and tightly shuts her eyes, hoping to block the images from her mind. Marshall cleverly doubles this scene at the end of the film, where Antoine brings a fairy-tale style dress to Angèle as she closes the salon. She puts it on and spins for him, much to his delight. (Again, the salon is lit up like a stage, with Antoine now sharing the spotlight.) Antoine’s ex-fiancee again interrupts the lovers, but this time, her attempts to break the lovers apart are thwarted. So, the “happy ending” exists, but at what cost? 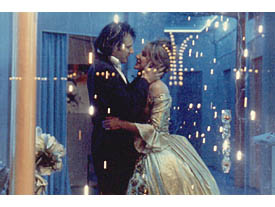 Venus Beauty Institute is rich with striking images and wonderful performances. Moderator Brittain Smith summed it up best as he described what was memorable for him about Venus Beauty Institute, that is, “the relationship between the mundane microcosm of the setting…and the incredibly impressive grandeur of the thematic scope of the movie.” It is, to be sure, a film that engages and attempts, though I’m not sure it succeeds, to break some of the so-called ‘impenetrable’ glass walls around modern romantic conventions.