The quintessential Boston streetscape—bow-front brick townhouses receding into the distance, punctuated by stone church spires—is indeed a compelling image, worthy of ardent preservation. And yet as we revere and protect the Georgian, English Gothic, and Richardsonian Romanesque architectural patrimony that surrounds us, a too-often maligned and too-rarely appreciated legacy of 20th Century modernism goes begging for friends and champions. As a city that was both a nexus of mid-20th Century design thinking and aggressive “urban renewal,” Boston embraced modernism early and with great enthusiasm. But then, having realized that much of it was sterile and overreaching, the city during the 1980s and 1990s retreated into something of a nostalgic design stupor, building every manner of revisionist red brick frippery imaginable. And yet for the city adventurist, or the urban photographer, it is only in the juxtaposition of the new and old that Boston casts its unique spell. Is it too much to ask that we reclaim the spirit of a time when Bulfinch and Bauhaus were seen not as anathema to each other but uniquely compatible, giving rise to a combination suffused with the daring spirit that built much of Boston in the first place? 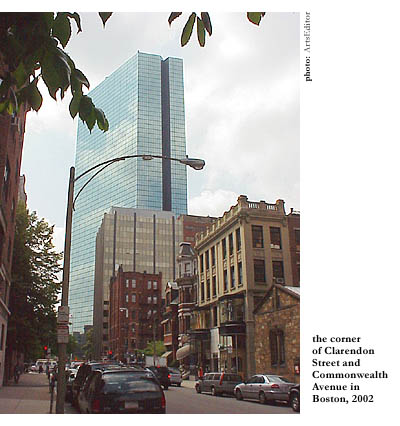 I recently heard an architect and urban planner make a pointed analogy: Cities are like omelets. Imagine, on the one hand, assembling all of the ingredients of an omelet and consuming them one after another, uncooked—bite into a stick of butter, slurp some egg white, gnaw on a piece of raw bacon. Now compare this obviously unpleasant repast to feasting on a completed omelet, one with all the ingredients mixed together and cooked, each contributing to the yummy mélange, each adding its own distinct flavor and texture.

It can certainly be said of 20th Century Boston architecture that there have been far too many omelet chefs who favored the uncooked over the cooked variety. First there was a strong ascendancy of architectural modernism in the years following World War II. Walter Gropius, as the dean of architecture at Harvard University, would hold court among local architects and planners and decree, ex cathedra, that whole parts of the city should be bulldozed and replaced with his uniquely Northern European vision.

The key, according to Gropius and his apostles, was to separate property uses—residential in one zone, industrial in another, retail in another, and office buildings in yet another. Many of these urban enclaves would be joined by wide, windswept plazas, free of automobiles, where people could promenade and interact far removed from the grittier realities of urban life. City Hall Plaza is only the most prominent of many local incarnations of this thinking.

As the decade of the 1960s progressed, however, more down-to-earth thinkers like Jane Jacobs and Robert Venturi began to question the sterile, cold-butter-and-egg-white approach to city design. They favored instead a “messy vitality,” a rich urban mixture of pedestrian and vehicular activity, low-rise residential buildings mixed with street-level retail, office, even industrial. But most of all they insisted on diverse styles piled one on top of the other. In other words, a cooked omelet.

There must be something about Boston that lends itself to extremes. Just as we now ask ourselves how so much of Gropius modernism could have gone unquestioned back in the 1950s and 1960s, consider how much of the urban design agenda of the 1980s and 1990s was handed over to the cadre of community design review boards and their allies. I call them the Architecture Nannies, members of an urban elite who, despite all of their pieties about “diversity,” tolerate little diversity in building design. The Nannies invariably speak of modern buildings “clashing” with classic Bostonian Georgian, as if urban architecture were like putting together an ensemble for a cocktail party. The endless committees and community design review boards are to architecture today what the self-appointed protectors of morality and virtue were in ages past. H.L. Mencken once opined that self-righteous busybodies “live in fear that someone, somewhere might be enjoying himself.” Similarly, the Architecture Nannies live in fear that someone, somewhere might introduce into a precious cityscape something that is daring, even jarring, a building that speaks of the age that created it.

Of course, there is another side to all this. The contrary argument asserts that the conservative tastes of review board members, far from being a particular quirk of the kind of people who get involved in local politics, are actually endorsed by the vast majority of “ordinary” people. After all, there doesn’t seem to be much popular outcry regarding the kind of buildings currently being constructed in Boston. The fact is, the argument continues, that most non-architects simply don’t like modernism, either because they find it intrinsically too cold and stark, too ugly, or because of the associations it has unfortunately acquired with urban decay. And in the land of democracy, what right have architects to impose their unpopular aesthetic visions on everyone else? Isn’t that positively fascistic?

This is a difficult point to answer if it is really true. Yet rather than labor my own contrary armchair assessment of public taste, I would rather try to convince people of the aesthetic case for modernism. For it seems to me that the transparent, ethereal quality of the best of modernist design flatters “historic” buildings in ways that fussy, mimicking post-modernism never could. Georgian and Bauhaus are each authentic, and each expresses the driving architectural passions of its own age. One wonders what following generations will think of a fin-de-siecle Boston that was too timid to produce any memorable buildings whatsoever. The architectural dish that has been served up in Boston during the past two decades is little more appealing than the raw, doctrinaire modernism it replaced. 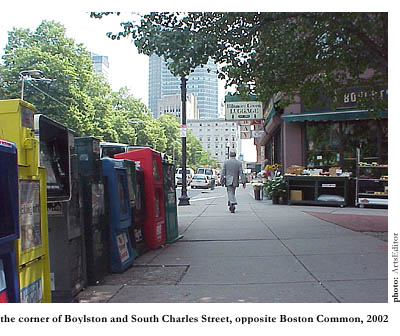 I live in Cambridge, Massachusetts. It has many obvious charms; as the home city of two global universities, it offers more culture than any one person can take in. It also has what architectural historians call a “dialogue across time.” A building by Bulfinch might stand cheek by jowl to one by Josep Lluis Sert. Together these buildings form ever-changing visual narrative, a winding text in stone, steel, and glass. And yet virtually every modernist building in Cambridge—Sert’s Holyoke Center, Benjamin Thompson’s Design Research Building, I.M. Pei’s Landau Chemical Building at MIT—was built well before the Nannies wielded any power. Could they be built today? Probably not, and we would be the poorer for their absence.

One of the Nannies’ current campaigns is to rid Back Bay and Beacon Hill of newspaper vending machines. Anything that smacks of commerce offends the Nannies, but to purge the cityscape of items like these is to render it a lifeless museum exhibition, bereft of the signs that bring people to cities in the first place—to make money, to consume, to be around other people.

Europhilic Boston has always looked across the Atlantic for inspiration. Beacon Hill has some of the flavor of London, and parts of Back Bay evoke the wide boulevards and Mansard roofs of Hausmann’s Paris. And yet look at what has been built in these treasured European urban landscapes over the past two decades—Pei’s famous pyramid, Jean Nouvel’s Library of France, Norman Foster’s Waterloo Station, Richard Rogers’ Lloyds of London—all buildings that reflect the audacity and optimism of the era in which they were built.

In Boston, the nation’s largest public works project (the Big Dig) is moving toward completion, and previously unusable sites are becoming ripe for development. What an opportunity! The city can tap its vast design talent and rediscover its own tradition of architectural ingenuity and daring. That would be coming full circle architecturally—in the most positive way I can imagine.