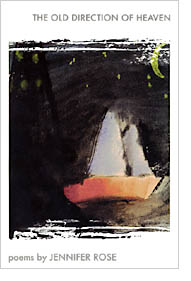 In the epigraph to The Old Direction to Heaven, Jennifer Rose’s inaugural collection of poems, we hear the 19th Century British philosopher-novelist George Eliot praising the love of the local. In a passage of manifesto from Daniel Deronda, Eliot admonishes us to “think of the mighty heavens as a little lot of stars belonging to one’s own homestead,” encourages “tender feelings for the face of the earth,” and guides us toward the pleasures to be had in “a kindly acquaintance with all neighbors, even to the dogs and donkeys.” The epigraph would seem to suggest that Rose, who attended the Cambridge School of Weston and Brandeis and who still lives in Waltham, has probably compiled some sort of Charles River Anthology about the sad secret lives of millhands who worked in the watch factories six days a week and picnicked on the river bank on Sunday after church. But even though her poems implicitly pay homage to the “mute inglorious Miltons” of the world, no such inference should be drawn from the epigraph.

Rather than dwelling on one quaint locale and invoking the gods of the regional, Rose goes on the road in this book. She takes us straight to Europe for the initial several pages, starting out in the grimmest of tourist hotspots for the first of many meditations on history. In the opening lines of “At Dachau with a German Lover,” we get the first bitter-herb taste of a style, characterized by packed line prosody and methodical metaphor, that “fastens” thought to the page, as Robert Frost had it. “I won’t go with you to Munich’s planetarium/though I have always loved a wandering moon,” she begins. “I cannot bear to bless a German heaven.” Two tercets later, she dares to slow the pace of the poem the better to get an unforgiving look at the place, in offrhymed, endstopped lines of simple declarative sentence:

Everything continues in this language!
Every chimney rises with a grudge.
The Arbeit gate swings slowly on its hinge.

Then, halfway through the 15-stanza poem, just before we turn the page for the first time, Rose explicitly assumes and asserts her multiple “alternative” identities—Jewish, leftist, bisexual—in defiant rhetorical questions posed to her companion at the concentration camp museum:

Tell me what it says, this chart of stars:
Which color is my destiny of fire—
yellow, for the language of my prayers?

red, for the fury of my cares?
or pink, my crime of twin desires?
This is my planetarium, these pinned-on stars!

With these symbol-smashing lines she also answers the associative inspiration that will possess the poems, in a measured, eloquent, murmurous way, with a grave sincerity hell-bent on probing and penetrating and peacemaking. Thus the good beginning of a collection of lyric poems suited to Wordsworth’s requirements of “overheard speech,” written aloud, it would seem from the sound, with the mouthful of marbles the Greek orators practiced their speeches with.

From Dachau we are taken—not by cattle-car and not by Lufthansa but on the old-fashioned European carriage of rhythm—to adjacent parts that have been the sites of their own ugly atrocities. We go to “Cologne’s Cathedral,” where “each buttress drops like a singed wing,/earthbound, too heavy or weary, as if/these centuries of witness were crippling,” for a delightfully dense look at an “umber chunk of Gothic mind” darkened by “history’s thick dust.” We take a walk in “The Italian Rose Garden,” albeit perhaps in an American locale, where, in one of several homages to the flower of her last name, Rose imagines “Mussolini speaking from the stone terrace,” the pergola behind him “a corridor/less meant for roses than for long rows/ of deportees.” In memoirs of 1982 travels, we get a “Mostar Postcard” (from Bosnia-Hercegovina) about a cafe haunted by furloughed soldiers demonstrating “how war makes borders glamorous,/our time brief and historic,” and where “history whispers in each soldier’s ear”—and then a “Lipik Postcard” (from Croatia, that is) about village women tending the lush floral garden near

the grave of Alfred Miller,
my great-great grandfather,
son of the village innkeeper,

who died hiding, running
with partisans, his yellow star on,
shot near the war’s end by Nazis (Croatian).

We might think that her departure from Europe, the theater of world wars, would bring peace or quiet or some kind of ignorant bliss to Rose’s poems. But “Even Here,” back home on the sandy, fecund, bayside shore of war-unravaged (but not war-unmaking) North America, the taste of atrocity still stings, like saltwater in a cut, the tongue that turns these poems. “Grass banks this house like a vast steppe,” she notices with grave clarity, in resonant monosyllables. “Spikes of goldenrod poke up/ and thistles guard the dune’s dominion.” Moreover, and ever more searchingly, “Horseshoe crabs’ helmets rust among shards/ of civilian shells. Eel grass holds the beachhead/ as no army ever could,” leading her by association to an inevitable, fragmentary, hesitant question—”Images of that war,/ even here—though how can one suppose/ to know it, among these metaphors?”—that is answered with what could inappropriately be called a bombing raid of vivid images.

After that, the poems stay put pretty much, settling for a whimsically dismal catalogue of similes and metaphors that describe a “First Frost in the Suburbs.” We see with new eyes, or glasses maybe, how “a slate squirrel, thin in the wrong season, drags/ its twine tail like a spent fuse.” We note how “[t]he petunias’ popped-balloon skin flaps empty sleeves” and wonder whether the poet has forgotten the preoccupation with history for a moment to focus, just for fun, on the quirkily anti-pastoral. But sure enough, in the end, postshadowing with uneasy sentiment the former catalogue of observed details, in the surprise comparison she’s been leading up to (that we should have seen coming): “A small orchestra of birds warms up at dawn— / frantic and lyric as Auschwitz’s musicians.”

Rose closes the history book for a moment here, but maintains the solitary, wintry mood, the painstaking inventory, and the stark, frostbitten emotion of “First Frost in the Suburbs” in the meditative sequence “Saratoga Journal Entries.” Then she sets off on a series of love poems (as if half the poems in the book haven’t already been ulterior love poems of a kind, we realize leafing back through them). “Venus is a distant muse, her yellow/ meridians swathed in shadows, bouquets/ of nebulae her only guarantee,” she moons in the melancholy “Horoscope.” Driving home from a date, she examines her “Regret” for the affairs her lover’s confessed and her corresponding longing

to kiss someone new, tell her I love her

with the white amnesia of a storm
about morning. I long to regret
the thing I’ve done—instead of haven’t.

In subsequent poems she longs for her absent lover through the “Fog” across the river, celebrates “The Kiss,” puzzles over her twin desires in “Sonnet to a Married Man,” taking full measure, quietly and modestly, of the entanglements of an uncertain love-life, sadly and bittersweetly describing her relationships in relation to—never out of the minutely particular context of—the settings in which they are developing, sometimes getting some true satisfaction, as in “Home After Three Weeks Away”—”Now every night our legs mesh/ skillfully—gears in the factory/ that makes the roses.”—and sometimes getting some deeply blue distance from her lover and seeking solace, as in “Solstice,” in the symbolic elevations of natural observation:

This garden is vicarious with pollen,
the thistle’s exile less wandering
than desperation. The sun hovers,

perfect lover, an immortelle. I browse
among these bleeding hearts, still unrequited.
Seasons of passion like this are not suited
to harvest. The rose burns out; the orchids bruise.

There are plenty of other impressive poems in The Old Direction to Heaven, and not all of them punning the oversniffed roses of romantic poetry. (There are no roses to smell, for example, in “On Losing the Sense of Smell.” “The wind is/ an empty boat,” she writes. “Overboard, bouquets/ of memory.)

Sometimes the poems may seem like exercises from the creative writing classes of Derek Walcott, handed down like heirlooms from functional formalists such as Elizabeth Bishop and Robert Lowell; sometimes, for all the heavy earthly imagery they so deliciously indulge in and get covered with, they may seem unable to rise above the subdued range of notes they’re used to playing; and sometimes the very precision of phrasing and the painstakingly syllabic scrutinizing of scenery may seem to render the tone a touch too formal for the times. But these are nice problems to have, especially for a poem like “A Morning Walk” that is spent enumerating dewy summer images and connecting them to their unsuspecting equivalents:

I cross half a dozen finish lines
that spiders strung last night between the boxwoods.
Twee-twee-twee trills a bird never named by Adam.
Cool sun, blurry, a scoop of melting sherbet,
drips its light over the meadow.
Crickets sing softly, a neighbor’s telephone,
but no one answers. The cicadas’ alarms
have not gone off yet. A freight train
clacks metallically toward New Orleans.

They are even nicer problems for poems to have when they are the five “Eastham Sonnets” sequence. These sandy and subtle sonnets, with some of the saturating stench of low tide in them, address the coy mistress who drives the inquisitive poetess to note, in lines that epitomize her technical command, inventive articulation of metaphor, and quiet humor:

Eel grass rattles in the dunes, silver,
overexposed, a drained monochrome.
It gathers the sand in its hairy weir
with a gray clasp. My claim to you is the same
tentative clasping.

In the end, throwing her hands in the air, she forces the moment to its crisis, makes appearance and reality one and the same (no more gaunt, bespectacled, tweedy shadow of T.S. Eliot between them), finds a true objective correlative for her meaning, her yearning, in the imagery at hand, and in doing so no doubt makes herself feel a whole lot better, which, come to think of it, has always been a good enough reason to work with meticulous attention to the craft of poetry: