White stars spangle the midnight-blue backgrounds of Gerry Bergstein’s paintings. Some of the stars are brighter than others, some have their low beams on, and some are seen through so much vapor and intergalactic debris that their diffused light sprays you when you look at them. The blue, too, varies, graduating from one deliciously rich side of midnight to the other, at times surprisingly close to dusk on one side and to dawn on the other, depending on the proximity to the nearest star and on the relative intensity of the star’s light.

That’s the beautiful background of all but two of the nine paintings in the third-floor gallery across the street from the ostentatious Ritz, where limousines wait for the earthly human stars who’ve blazed into Boston through the sky on jets. It harkens back to Bergstein’s own background in Queens and the rockets that served as the subjects of his first efforts to draw.

Deep blue space, however, is not all that catches the eye upon entering the gallery. From this safe distance by the door, you also see the familiar image occupying the center of each canvas — on two canvases, a map-shape of the United States that invites a satirical snicker; on two others, a Valentine heart-shape tilted at a lovestruck angle and also immediately comical to the veteran critic of Hallmark sentiment. A ludicrously rigid male figure of the kind found in 19th Century commercial advertisements — his well-oiled hair parted down the middle, his substantial mustachios greased, a ridiculously chipper look on his face — appears in two of the pieces (one of them lacking the skyscaped background but including instead an airborne rocket). But what are those images comprised of ? No individual states. No cherubs. No Victorian clothing.

Approaching closer, you see that the shapes of the map, heart, and man are all composed of individual images in collage on one plane. Those aren’t actual overlapping sheets torn from a spiral-bound sketchpad, though, each sheet offering a single interesting image without much specific relation to the comic general image it helps to comprise, some of the sheets dogeared, others ripped in two. Those are illusionary sheets, trompe l’oeil, floating on that deep blue space spangled with those stars. 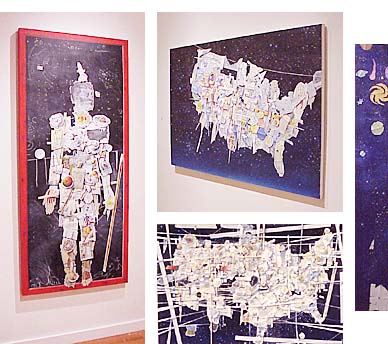 In just about all the paintings, there’s a cartoonish lightbulb on one torn-away sheet, next to that a graceful paintbrush with a purple edge of shadow, above that (and overlapping a corner of it, maybe) a quickly sketched clock, and then off to either side perhaps a Jasper Johnsesque target done in three primary colors. There’s the ubiquitous tiny image of a wide-hipped, slender-necked vase stemming a spray of red and yellow florets. Trompe l’oeil lists (in trompe l’oeil pencil lead) appear in all the paintings, including lists of Bergstein’s influences (from Fra Angelico, Gorky, and Magritte to Frida Khalo, Phillip Guston, and Ivan Albright) and lists of emotional states (arrogance, generosity, desperation, ecstasy). It’s all quite tidy and random at once, kind of ridiculous in a loveable way, very easy on the eye, communicating a kind of playful and lighthearted friendliness, celebrating the right to lampoon the canned cultural icon and maintain a sort of idiosyncratic happiness. A happiness rooted, probably, in the love of painting objects for themselves and for their representative properties.

You’re liable to be grounded, amused, and delighted by the pop-arty collage of temporal, banal images that blocks out most of the skyscape. But your eye keeps wandering to the margins for gazes upon that eternal and profound, for peeks at the starlit spaces that appear here and there between the individual sketchpad sheets that float weightlessly on the sky. You wonder if it would be enough if each painting in the show consisted solely of the throbbing cosmos depicted with no sign of brushstroke, and whether then you might project yourself once and for all astrally into one of those paintings and disappear like a space cadet, bareback on a rocket. Maybe the limousines across the street would be waiting for you when you fell out of orbit.

You might not be sure which to prefer, the likeable junk of earthly life or the awesome beauty of those heavenly bodies. You feel the tug of the mortal, remembering Yeats: “Man is in love, and loves what vanishes.”

You might not be quite ready to commence your space travels just yet.