True to its namesake’s position in the Greek alphabet, Alpha Gallery lies at the beginning of Newbury Street. A humble door with the number 14 leads to a stairwell that rises to the 2nd floor, where two glass doors open into a wide gallery. With their size, content, and smell, the paintings on the walls make the space immediately meditative and at once startling and centering. Flesh-like, they pulse with the energies normally only found in animate creatures. These windows into the vision of Wlodzimierz Ksiazek offer glimpses into the processes of painting, living, and exploring both medium and experience in ways that are at once visceral and honest. The reality of these pieces shakes the viewer out of personal constructs and externalities, and it leads the way into the sometimes paradoxical territories that reflection conjures and creates. 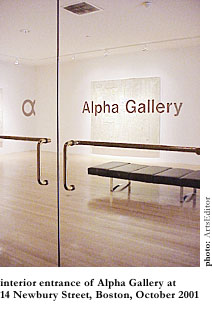 Ksiazek’s paintings are human in their complexities, their scale, and their tones. The textures that he works with are meaty and close in their richness to the voluptuous canvases of Lucian Freud, with their generous application of paint and cold wax—which retains some of its texture and physicality. The fleshiness of each canvas also summons thoughts of Jonathan Swift’s Gulliver’s Travels, with the voyager’s experiences in the world of the Brobdingnag:

“I must confess no Object ever disgusted me so much as the sight of her monstrous Breast, which I cannot tell what to compare with, so as to give the curious Reader an Idea of its Bulk, Shape and Colour. It stood prominent six Foot, and could not be less than sixteen in Circumference. The Nipple was about half the Bigness of my Head, and the Hew both of that and the Dug so varified with Spots, Pimples and Freckles, that nothing could appear more nauseous…This made me reflect upon the fair skins of our English Ladies, who appear so beautiful to us, only because they are of our own Size, and their Defects not to be seen but through a Magnifying-glass, where we find by Experiment that the smoothest and whitest Skins look rough and coarse, and ill coloured.”

Close examination of anything entails the discovery of new perspectives that are not always comfortable or reconcilable. Swift’s perspectives revealed the everyday nature of humanity; he used the variation of scale as his lens through which to do that. Like Swift, Ksiazek plays with scale to challenge perspectives and move people into the space of his work.

Among other currents that surface is a connection to Mark Rothko in the spatial relationships of the paintings together. Much of this connection is serendipitous given spatial constraints within the gallery, but the smell of the wax and the presence of these works on giant canvases stir a reverent sensation, making the space chapel-like. The nature of the modern gallery as temple to aesthetics also contributes to this mélange of sensations.

Experiencing the power of these pieces at first is overwhelming and disorienting—perhaps like coming to a new country. Changes in energy. Aesthetics out of sync with surrounding sensibilities. Rushes of emotion and confusion with the profusion of images that are alien to everyday experience and methods of contextualization. Not knowing where to start in the midst of large paintings, with the intensity and atmosphere of each one so strong, a good place to look is in the corner of the gallery, at Untitled [painting #9 of the exhibition].

Its scale is intimate. The size allows the viewer to peer in and have a small window through which to see the beginnings of his process. The format is a departure from the normally large canvases he produces, and the shift in operating style creates a departure point for the viewer not familiar with Ksiazek’s work. 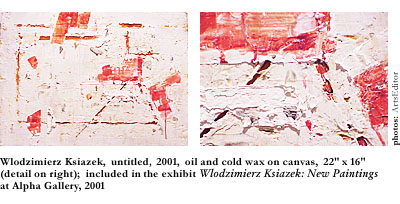 No frame binds the painting, and traces of the layers of paint and washes read like a geological record, indicating the accumulation of strata that inform each present decision that the painter made. These traces are in brilliant yellows and blues, indicating the primary foundations of color and expression as the groundwork for the complexities and subtle variations on the surface of the work. The monochromatic textured mass of encaustic and oil eclipses the brilliance of these tones, but the colors are revealed in moments of clarity in the deeply incised lines across the surface of the canvas. These troughs pulse with earthy siennas reminiscent of dried blood, and the vivid primary notes glow through unbridled in their exuberance. Coupled with the presence of brush strokes, hair, and even fingerprints, the painting assumes humanity.

There is also a play between the shallow application of collage and the incision of line. The collage pieces resemble attempts to cover those lines as a type of afterthought or even regret, raised by opening wounds or memories that were better left unexamined.

Near the storage area rests Untitled [painting #7 of the exhibition], the most colorful of the pieces. A sickly green washed with broad, white strokes, its presence looks like it needs the strength of the platform it rests upon. Here too are the deeply incised lines of collage. There is a tension between the green and the electric Velveeta color of the blocks. Chunky blobs of yellowness drip down the canvas as if drawn by gravity, which is confused by the direction of the brush strokes. 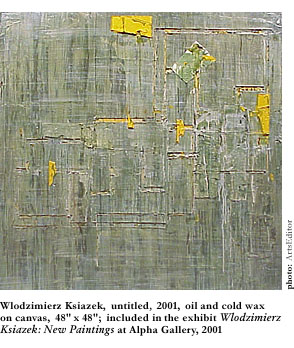 While unsettling to the eye in composition and color, there exists a strong base line driving the assertion that human experience consists of the strange accumulation of moments shown in the layers of varnish, wax, and paint. Linear thought informs reflection on the past, as represented by the incised lines throughout the canvas, in an attempt to grasp the confusing and often murky nature of why events transpired in the way they did. With this exploration there exists a warmth in the exposed canvas below the muddy accumulations. Such lines indicate the paradox of memory that can both liberate and enslave the mind: linear searching can give a sense of understanding through context, but at the same time, there lies the danger of constructing a series of events that fits the comfort level of present circumstance. Every day we build a reconstruction of the world in an effort to find broader significance and to maintain a sense of balance in a homogenized culture.

Proceeding into the larger space now, with the themes of memory, reflection, and the great attention to process in mind, the paintings become more inviting and warm. Untitled [painting #6 of the exhibition] is the coolest of the group, with regards to its atmosphere. There is an element of intentional erasure that is more apparent than in the others of the show. A vital red glows beneath applications of white. Even the incisions, which in other paintings have been tinted the color of dried blood, succumb to the gloss of the brush—a strange unification.

Elements of collage also show within this painting, most covering parts of the incisions as those in #7 did. The canvas is also less impastoed than the others—the surface is heavily combed, indicating an obsessive working of the canvas.

Different here, though, are the lines. They are more architectural in appearance, as opposed to what look like frantic scratchings at the surface. It is a bit unnerving to look at what resembles the bloody framework of a structure, and then turn slightly to the right of the painting and gaze out across Newbury Street at the rich sensuality of the church on the other side of the street. It resembles the remnants of an exploration into the past from above, mapping the explorations within.

Untitled [painting #2 of the exhibition] is a combination of all of the above elements—archaeology, impasto, warmth of tone, memory, and sensual exploration of process. There is a more composed exploration of the primary layers beneath the accumulation of surface marks and texture. A resulting effect is that the aura of the painting is more meditative. It breathes together as a whole. The excavations, though slightly more shallow, are more unified and determined. Even the collage has become more integrated—be it more impastoed. 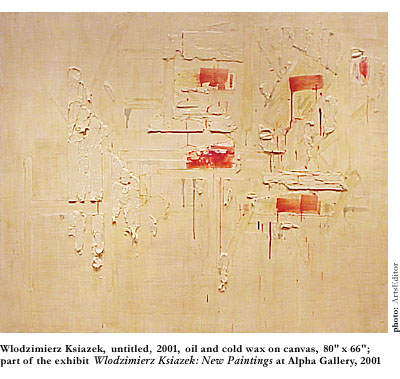 The results of this unity manifest themselves in the painting’s being more resolved and at peace than the others in the exhibit. It hits notes that are clear—strong color; sensual application of red washes with bold initial strokes. The tell-tale signs of humanity, apparent in brush strokes, finger prints, and hair, are not in the whole of the painting, but on the bottom, presumably where the artist had the piece resting on the floor. A result of this attention to detail and the leaving of this detritus is a strange evocation of a three-tiered Renaissance feeling in the piece. The elements of humanity rest on the bottom third. The composition of the passion, the searching for mysteries of faith or memory resides in the middle of the piece. And the white space above the canvas represents the hereafter.

In many respects, the washes and applications of wax work as skins. The wax breathes, and upon entrance to the gallery, its subtle exhalations envelop the viewer. As the largest human organ, skin takes continual punishment from externalities. The accumulation of scars bears witness to the rich diversity of experience and pain. Contained within that pain, though, there is the incredible mechanism of healing and resolution, which bears the scar as a remembrance of that passage.

These paintings bring the viewer into the drama of a life adventure that is still unfolding. The sides of them are unframed, which indicates their freedom to evolve into their next manifestation. Leaving the paintings unframed also conjures thoughts of row houses that have had their neighbors demolished—showing internal architecture, a nod to one of this artist’s disciplines.

Ksiazek’s paintings are very human in tone, composition, and smell. After the initial impact upon entering the show, there filters through the atmosphere a spontaneous joy found in moments of color, the sensual accumulation of wax, and the unencumbered vitality of the drippy washes. Such sensations echo larger processes in the context of human experience—shock and anguish evolving into strength, and strength evolving into joy and renewal. Revealed here are glimpses of that journey. The size of the canvases invites the viewer to step in. They are portals inward to discover what lies within and without. Their example inspires one to begin or renew explorations of those regions obscured by the confusion involved with the current state of global affairs.