From the blurry edges of night they come. Urban nomads in search of what… new ideas, answers, or is it to reclaim lost meaning? Maybe it is all of these. The night will reveal, but it will also spin out more questions than answers. Who are these night nomads? They are all of us, looking for new hope amidst catastrophe, expropriation, and destabilization. So they come. Maybe they can find some comfort in shared experience after loss. Maybe the answers they find on their quest will restore their lives. Maybe they can take back the night. 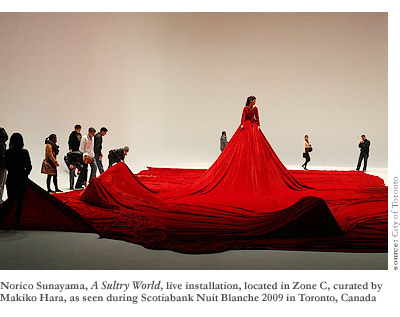 The place where they seek their answers is Toronto during Nuit Blanche, translated as “Sleepless Night,” from the night of October third through the dawn of the fourth. It is a chance for these nomads, the spectators of this wide spectacle, to celebrate the city, art, life, and themselves.

Rather than serving as a carnival only to amuse, Nuit Blanche treats these night owls as adults who can question the everyday realities of the power structures around them and help them to use imagination and senses to open up new possibilities. They—we—know the recent hardships of economic rupture, racism, sexism, homelessness, and overweening surveillance. Perhaps this night will bring spectators together to renew the covenant of community.

Starting in Paris in 2002, Nuit Blanche has expanded into a network of worldwide cities lighting up the night with challenging art installations, dance and music performances, and general mirth. Toronto, one of the first North American locations, has worked out the festival with Scotiabank of Canada and over a dozen other corporate sponsors and media partners.

According to Giannina Warren, Media Relations Supervisor within the office of Economic Development, Culture & Tourism for Toronto, the city implements ideas, but they are all conceived by artists. Some projects are unfeasible, but Warren assures, “I’ve never met an unhappy artist.”

It is an unusual festival in that revelers find their city cloaked in new ways. Their perambulations lead them to a one-time distillery district, now taken by galleries, and other districts that take on a haunted appearance in the moonlight.

Wandering tribes will step into three distinct worlds, or “zones.” Curators of these zones were chosen by the City of Toronto’s Special Events office in consultation with this event’s advisory board. Proposals were reviewed by the board, and curators were chosen. Each zone has a theme, with Zone A showcasing two concepts.

Gregory Elgstrand, curator of Zone A, came up with the idea of The Circle with a Hole in the Middle, a construct of a hole into which ideas drop and build with other ideas. This concept is realized in Jeff Koons’ Rabbit Balloon, a gigantic piece in the Toronto Eaton Centre. Referential of Alice in Wonderland, Koons allows viewers to determine its meaning. Said Elgstrand, “The hole descends as the looking glass ascends.” Does the rabbit protect us or menace? 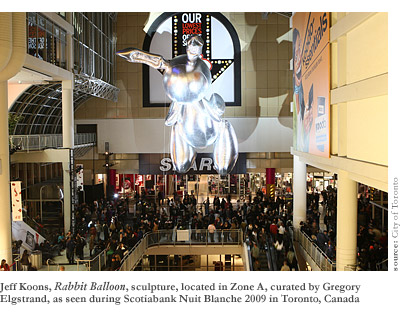 The second Zone A concept, called What Were We Before?, curated by Thom Sokoloski, allows visitors to investigate “their individual past and present.” This night they will come to terms with who they were, and who they can become. Sokoloski quotes a master of space, Henri Lefebvre: “Any revolutionary project today, whether utopian or realistic, must if it is to avoid banality, make the re-appropriation of the body, in association with the re-appropriation of space, into a negotiable part of its agenda.”—The Production of Space, 1974

Re-appropriating space is possible in the project As Could Be, by artist Paulette Phillips. Here is a ghostly image of Vladmir Tatlin’s unbuilt Monument to the Third International, the centerpiece of the Constructivist movement. Here it is projected onto fog and on the wall inside the sturdy Old Bank of Toronto building. On speakers, investigators hear Socialist chanting and poetic accounts of what work means to Torontonians today. Can they find utopia within the means of society-building they have now, or is it an ideal for the imaginary, never to be reified?

And what of their bodies? Can these anglers use sense to connect to answers tonight? In Zone B, Nightsense, they find a means of using their innate non-visual senses to connect with other subjects and values. Jim Drobnick and Jennifer Fisher, the curators, talk about a “sensory economy,” a sensorium that reinforces “powerful links between bodies, aesthetic perception, and shifts in capital.” Drobnick propounds the idea that people can participate using non-visual senses to find connections with the specificity of Toronto’s financial district, the site of Zone B.

The two curators invite a ludic—meaning playful in a serious, investigative way—exploration of the district. They want visitors to consider how our culture, financial and otherwise, privileges vision above the other senses (“seeing is believing,” says Fisher), and how we can use kinesthesia to contribute to our view of the world.

The sense of smell will tempt the brave tonight into 10 Scents by Chih-Chien Wang, where the port-a-potty experience becomes an olfactory exploration of Alice’s Adventures in Wonderland. (No connection to Rabbit Balloon, the curators assure.) The curious hold their breath to prepare for the expected smells inside the all-too-familiar comfort stations. Inside, however, they find scents that trigger sensations associated with longing, memory, and desire. The marigolds in one lead to more subtle scents. Is that an urban canal… candy… a prostitute’s boudoir, redolent of cheap perfume and stale cigarettes? Each daring partaker must decide.

The human ability to combat cataclysmic financial forces is but one disaster that Makiko Hara, curator of Zone C, Urban Disaster/Catastrophe/Survival Actions, tackles. War and other turmoil are not seen as ineluctable forces by Hara. By putting ourselves into a flow of imagination, she says, we can find renewal in our lives. That is one of the main tasks for these discoverers here tonight, as they are all refugees from some form of hardship. 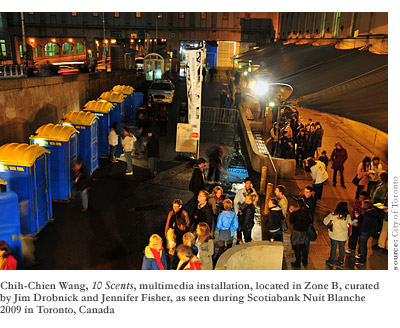 The roamers in the streets may not make connections to each other, but the opportunity is there. They may also miss ties between the zones in the heady rush of it all, but they too are there.

Hara’s “flow of imagination”, Zone B’s flows between bodies, aesthetic perception, and shifts in capital, and Zone A’s flow of ideas all cross in Brad Todd’s redTV, a visualization of debt flows in the red. Projected onto a glass panel of the Richmond-Adelaide Centre is a strange form of computerized imaging. Live signals from financial news programs, representing market fluctuations, play out in a dance of ephemeral red splotches. It is less map and more schemata. Todd sees television as a direct parent to imaging technologies. He twins the transience of the medium with the continuity of its effects on humans through several generations, as his Web site discloses. The artist muses on our uncomfortable relationship with technology and its close relationship with bodies. Talking with Todd, he said: “It can also be read as a planetary model as far as photography or as a petri dish because information can be a metaphor for the circulatory system, the lifeblood of our world.” Onlookers may get a sense of unease at the sight of something not usually tangible.

They may and should have a sense of discomfit throughout this night. They make ground here, pacing themselves for the peregrinations they take, yet the ground they’ve lost comes in reminders. Deterritorialization causes displacement, so their divagations may tell.

Some of these nomads have felt the hammer of the recent financial debacle. Wild Ride, a midway with carnival rides on Bay Street, arranged by Shawna Dempsey and Lorri Millan of Winnipeg, addresses these concerns. Appropriately staffed by recently “let go” businessmen, it is meant to show the ups and downs of the market in the last year. It shows something of the maturity of Canadians, who can openly spurn banking while a major bank sponsors the night.

Yes, signals on what they have lost and will lose abound. In Randy Gledhill and Berenicci Hershorn’s Catastrophe Theory, a vision of a post-apocalyptic world humbles the world-weary among us. It is a compilation of the artists’ site-specific and time-based performances, installations, videos, and public sculptures since 1982. The work is a reinterpretation of a 1983 project of the same name.

Free-standing video monitors in the first room—”environment” seems to be a better term—depict such bizarre actions as a faun playing the violin for a woman, people contorting and expiring in front of the “Death Trip” funhouse, and men wrapping a leader with leather straps (from the artists’ Videage of 1981). In the next environment, a muscular man hits an object as if it were an 18th-Century mantle clock (from Unbashed Heroics, 1982). More telling is a conqueror uttering, “Vini.Viti.Vici.” In the last environment, a group of video monitors are on the floor, or partly buried in dirt. They depict scanning cameras over water meters and boilers, reminiscent of Robert Ballard’s underwater shots of the Titanic or the spirit of David Lynch’s industrial leftovers in Eraserhead. There are small piles of block letters, which visitors can use to spell words. The room recalls the artists’ Rune of 1986. It too had classical references. As a rune is a poem or aphorism with mystical meaning used in casting spells, this last room seems to invite participants to undertake the rebuilding of the world through magic and ritual after its destruction by war and decadence. 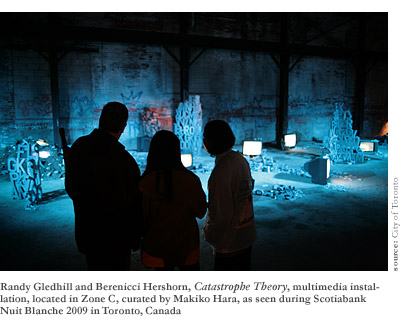 Aside from repossession and survival strategies, another theme the ramblers may discover is community. How can we work together to save our world? You could detect a sense of partnership in small ways throughout the night. It was the young woman who walked around with a paper cup because she did not want to litter. It was in the words of Daniel Sidorowicz of Steep Slopes Media, who came with his crew to document the nomads. He said, “We’re here to document the people who are attending Nuit Blanche because we find that’s more beautiful than the actual art itself.”

Some might make it over to Cabbagetown to experience Cubemmunity. Brian T. Moore, a self-professed “cubist,” throws up footage he shot in the surrounding area on the sides of a cube. Each chord he hits on the keyboard corresponds to certain images, which progress in some kind of primitive storytelling of sorts. The neighborhood people and others can dance and interact with the cube all night. For Moore, it is a “gathering of community,” and a “multi-media bonfire.” For Edward Houston, his co-worker here and at The Urban Cottage on Canary Street, the Video Organ, as he calls it, and the cube are vehicles by which nomads come to laugh, tell stories with friends, and celebrate any way they want.

Community helping to restore lives after the depredations of economic collapse, despair, cultural degeneration, and anomie… it is a blessing. We hope some of the urban nomads will pick up on this message tonight. Still, human nature being what it is, we can’t help but notice the public drunkenness, the fights outside the clubs, the incensed young man who was taunting the police at the barricades, the unruliness of some detractors.

Nomads may learn from the art or not. They may see inspiration on how to behave more decently toward one another, how to find common ground, how to reacquire the loss of dignity this hard world took from them. Or, they may pass through the bandwidth of night into morning none the wiser. Their conflict can be reduced to a single representative, the good-natured man who volunteers at one of the more sensual projects tonight. He works in a spirit of togetherness with other volunteers. Always solicitous to visitors, he proffers a genuine smile when asked a question. Then, with a one-quarter turn of his face, he exposes a large black eye. We have a long way to go.