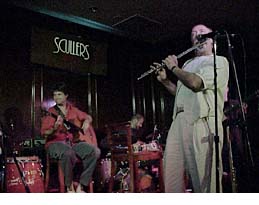 Considered to be one of the most progressive jazz flutists, Herbie Mann has been a musical force since the early 1950s. His interest in ‘world music’, which was underway well before the term was coined, has brought sounds from around the globe into his work – from Africa, India, Cuba, Japan, and most prominently, Brazil. Mann performed at Scullers Jazz Club in July. His current plans are to travel to Budapest later this year and continue to diversify, recording a new album with Hungarian musicians.