“And I, Wlodzimierz Ksiazek, will be standing there, alone!” These were the final dramatic words of the painter, after an angry diatribe against the state of contemporary art and its inevitable swing back to a kind of art that Ksiazek exemplifies. This style does not confront the viewer with conceptual significations or the clever use of idiosyncratic materials, but an opus achieved through process and craft. It is, in fact, process art, exemplified in the period known as Modernism and perhaps more specifically as Abstract Expressionism, although Ksiazek, born in Warsaw, Poland in 1951, does not identify his art with this latter movement. His ultra-thick layerings of paint, forming gradations both sculptural and tonal, are a mature and highly individual expression of his personality and hence defy categorization. But their function as a record of process is what really intrigues me. 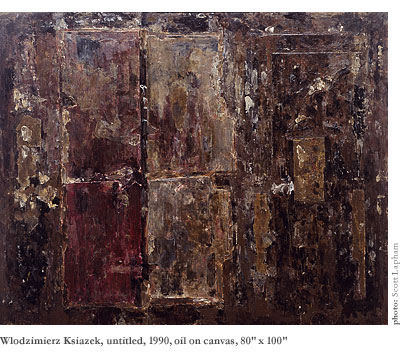 Art made today in this style does not receive as much critical support as it once did. For example, the work of Jackson Pollock (and Modernist art in general) was advocated by the writings of New York art critic Clement Greenberg, who has inspired my own thoughts on aesthetics, particularly in the use of the term mimesis in his 1939 essay “Avant-Garde and Kitsch” for the Partisan Review. Mimesis typically recalls Plato, whose rejection of art was based on the idea of a double (or even triple) mimesis. In brief, the objects that appear before our perception, the phenomenal world, are an imitation, an outer illusion, of the real Idea. Thus a painter that reproduces a given object is creating an illusion of an illusion—a mimesis of a mimesis—which logically results in its untruthfulness. But Greenberg redefined mimesis as a means to validate the efforts of Modernist painters. In his sense, the artist turns away from the external world and imitates “the disciplines and processes of art and literature themselves…the medium of his own craft.” Each phase of an artwork results from the learned experience of reflecting upon, and imitating, what was successful in previous productions.

For example, I studied images of Ksiazek’s earlier paintings and compared them to his more recent work. I discerned that a certain method of splattering paint or a certain combination of oil and color in an earlier work becomes imitated in later paintings. Perhaps emulated would be a better term, since the uniqueness of the previous production can never be directly duplicated. Certain “motifs” of smooth, flat surfaces are reborn in subsequent compositions, while the excessively chaotic buildup of paint is more consciously mastered. If we look at one of his untitled paintings from 1990, there are already signs of his contrast of smooth plains and rough concentrations of texture. Ten years later, an untitled painting from 2000 reveals mastery of perception of the contrast between these two antitheses in his work. Flat areas and neutral zones contrast harmoniously (if it is possible to write such a contradiction) with heavily textured regions. Yet, innate to process work, Ksiazek could very easily return to some of his earlier compositions and begin to emulate other aspects, offering new directions in which to travel.

It is in the above fashion—reflecting upon and learning from past successes and failures—that all human knowledge proceeds. The carpenter learns from his successes and failures how to wield his tools and the scientist via experimentation perfects his methodology. However, what makes process art significant to other art forms and other fields in general is that this process of learning and experience is, by nature of the medium, made visible. The effects of efforts from previous struggles are incorporated within a present work, and even within the present work itself are elements from its own exploratory beginnings. 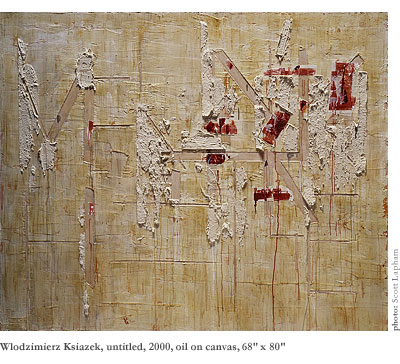 This is one of the reasons why I believe the human spirit is attracted to such art. An artist in this vein is successful as much as his efforts represent all the attributes of investigation and learning. This includes, along with much time and work, the proverbial “seventh day,” a discerning reflection on what succeeds and what does not. This is probably better characterized as the seventh minute, or even second, as this process of reflection and transformation is continuous. It separates a great artist from a timid one—the latter may settle for a decorative art form whereas the former pushes his or her art deeper and deeper into an image of the act itself. Especially important is that such constant reflection and production also results in an artist’s own unique style as opposed to the contemporary obsession with originality. It best typifies the Modernist admiration, inspired by Immanuel Kant’s Critique of Judgment, of the aesthetics category of the Sublime. For we may loosely say that the sublime refers to energy, might and raw creative instinct, in a somewhat similar fashion that Friedrich Nietzsche characterized the Dionysian.

I’ve witnessed this practice throughout the work of Ksiazek. The oil paint seems at times hewn with a palette knife, either roughly or in clean lines, in the case of the latter to formally oppose the chaotic nature of the gradations of color and unexpected buildups of texture. The play of somewhat straight strokes with roughness results in what Ksiazek says could evoke “particular images, for example, archeological sites, floor plans of artifacts such as cathedrals or quotations from architecture.” The under-colors, which are tones placed as previous layerings, mix in myriad fashions with successive layers on top. His mastery of this technique is revealed in the subtleties of the end result—we as beholders may immerse ourselves in deep variations of blue, or brown, or whatever color is deftly combined with lower-level tones. The artist’s love of the intensely textural is revealed in his catalogues, which include precise closeups of such regions—the camera lens wishes to instruct us to not only view the piece as a compositional whole, but to move up close, to allow the entire work to occupy our field of vision while we engross ourselves in particular sections. 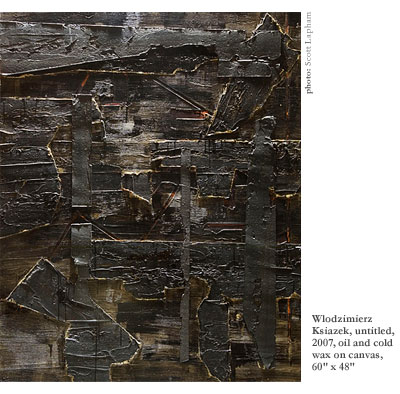 A process painter like Ksiazek also tends not to begin a composition with a distinct, ossified concept determining its final form. It emerges during execution. The studio becomes a place of surprises and discoveries. A particular composition may start with a kind of generalized intuition, but then its final form will represent layers of fortunate accidents. In fact, key to creating an environment that allows for discoveries is a kind of roughness to the art style itself. If a painter, for example, executes a composition by filling in hard external lines, there is little possibility for discovery. Instead, if the paint is laid down roughly, without too much deliberation and control, an “event” may occur that reveals new directions. In the meantime, what is guiding the artist is the knowledge gained from past works. It is not a hard, rigid concept in the mind of the artist, but a limpid, fluctuating vision gained from experience.

I sought examples of this during a visit to Ksiazek’s imposing New England studio, and how he in particular might approach his compositions. I discovered, to my delight, that he had hung on the wall by one of the windows his rough “sketches,” detailing the direction of the larger works. In a follow-up e-mail, Ksiazek stated that these sketches are:

products, almost like a notebook, diary, or sketchbook, where so many things come to my mind [while] I am involved in a larger project as, for example, making a large-scale painting. They allow me very quickly to put together several ideas using a variety of materials which I have around the studio. Sometimes, however, I can work on “sketches” for a long time, trying to get some sense of visual/emotional/intellectual effect, which I tried to get within my large compositions. On the other hand, working in that format and with that method allows for sloppiness, imperfection, chance, fragility, etc.—and with those, certain effects surprisingly or not occur, for example, strongly accented three-dimensionality, unusual color combinations, etc. Some of the sketches become direct ideas for large compositions, however in the process of working large, initial input can be obscured or even lost.

Another characteristic of process art is that the finished work also embodies an ambiguous meaning—there is no specific representation or concept to which it refers. The layers of laboring engender interpretive meanings. Returning again to Kant, such work invites the beholder to a free play of his or her imaginative faculties. Think of a time when you have stood “wondering” about a particular painting or sculpture while yet moved by its beauty and force. The beholder is freely invited to interpret the work, ultimately relating it intimately to him or herself. For this reason process artists like Ksiazek tend to collaborate with creative writers and poets. Such collaboration results in a creative response to an artwork, an extension of its energies into other media, instead of a sober, critical appraisal. 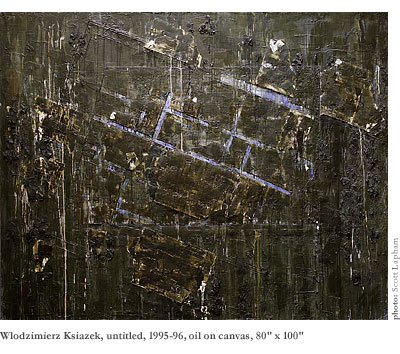 Finally, process art achieves a distinction especially relevant today, namely that the artist makes the work from start to finish. Museums and galleries are often full of artworks that were designed by the artist and then executed by some other entity to which no reference is given in the final product. This is not to say that such works are inauthentic—on the contrary, it is necessary for many artists to become interdependent in the realization of their projects, especially larger public works and bronze casting. What is not permissible is what I find to be the subtle exploitation by galleries and contemporary art institutions of the identity of the artist as the sole creator of the work in question. Unlike film, in which the final scene is followed by a long list of all the contributors with detailed titles explaining their roles in the production, in contemporary art, often just the artist’s name is listed without any effort to acknowledge the hard work of the production crew. Process art personifies the almost romantic conception of the artist-creator—it necessitates his or her hand at every pass. It is the paradigm of artistic authenticity.

As an art form, more than any other, process art touches upon a uniquely human, existential sphere. The revelation of learning, discovery, and reflection, and the direct presence of the hand of the creator, define it as a perennial art form that will always be “contemporary.” Its ambiguous meanings invite a lively imaginative discourse with its beholders. Like a poem that transcends its theme via flow, rhythm, and alliteration, process art transcends signification by its sensuous and metaphorical reality. We should be enthused that artists such as Wlodzimierz Ksiazek continue what is not a tradition but an authentic methodology.