That John Flansburgh could have become the President of the U.S. and Emily Dickinson may have been re-incarnated in John Linnell did not escape the notice of charmingly theatrical musician Syd Straw. It did, however, escape both Johns, who met at junior high school in Lincoln, Massachusetts, and formed the band They Might Be Giants instead. Twenty years later, the husband and wife team of director A. J. Schnack and producer Shirley Moyers present their documentary movie about the duo’s evolution at a special screening at the Museum of Fine Arts, Boston. Gigantic (A Tale of Two Johns) has been playing at film festivals around the country, accumulating generous star ratings along the way. And yes, They Might Be Giants are still going strong, which is nice. 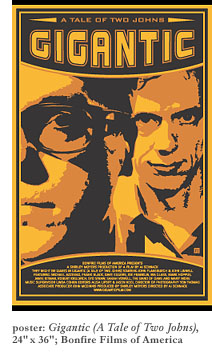 Comprehensive survey of adjectives used to describe TMBG (to which the band’s name is commonly abbreviated in pushed-for-time modern America): indie, witty, bizarre, artful, a cross between Sesame Street and Sylvia Plath (err, whatever…), whimsical, hilarious, avant-garde, and quirky. Always quirky. In their own modest words: “It’s okay to call us whatever.” Yes, they are nice. Too nice, in fact—for who else but they are qualified to tell their fans and critics that they are just not getting it?

I had received prior warning about this undesirable daftness and general bewilderment TMBG attract and provoke; the day prior to the screening an NPR broadcast provided the world with a taste of what an interactive experience with the band could turn into. Their surreal wit went entirely over the head of NPR interviewer Jacki Lyden, who has evidently been to one too many countries at war to appreciate the humor of absurdity. Still, her earnestness paled into insignificance after a few phone calls from random listeners, who just would not accept that some of TMBG’s lyrics (for example, “I’m going down to Cowtown/ the cow’s a friend to me/ Lives beneath the ocean/ and that’s where I will be”) mean nothing at all, and have been written neither to change the world nor to educate its children. The cherry on the cake came from Cape Cod on this occasion, in the shape of a whole family (mom and dad plus 9- and 7-year-old daughters) calling in to sing one of TMBG’s latest songs to the world. “Oh my goodness,” was Flansburgh and Linnell’s reaction, arguably the understatement of the year so far. Undeterred, the Cod Caperers ended their performance with a suggestion: “Why don’t you write a song about this Korean dish with a funny name? Would it not be just hilarious?” It would indeed.

Then again, maybe they deserve it ultimately for releasing a children’s record.

Anyway, I meant to write about the movie. It’s the evening of the MFA screening and the audience (of the easy clap and easier laugh kind) gives a more than warm welcome to the documentary-plus-film-director-plus-MFA-person package, even before it all starts.

And then it all starts. Syd Straw (who toured briefly with them during 1992) wonders, in her distinctively out-of-it fashion, how serious the film is supposed to be. The answer, Syd, is too much. Okay, it’s not Behind the Music, but the tone is slightly too triumphal given that the average human being has never even heard of TMBG.

Schnack begins with the very beginnings, with John Flansburgh banging a stick in trendy mid-’80s clubs in New York’s East Village before sickness (or repetitive strain injury?) forces him to desist from such behavior. Out of this hiatus in their live career arises their Dial-a-Song service, whereby a new song is regularly recorded on their answering machine for the delectation of their impatient, incipient public (still running today: 718-387-6962; please do…). From there they get ever more gigantic, a mélange of performance footage, band interviews, and behind-the-scenes material sweeping us along as far as the release of their seventh studio album, Mink Car, in September of last year.

The film has its amusingly surreal moments; TMBG’s appearance on The Tonight Show Starring Johnny Carson is a postmodern classic. Similarly amusing are the over-earnest high school kids trying to rationalize the duo’s supremely preposterous ditty about Particle Man and his various battles with Triangle Man and Universe Man (sample: “Is he a dot, or is he a speck? When he’s underwater does he get wet? Or does the water get him instead? Nobody knows, Particle Man.”). And there’s more—a teenager met her fiancé at one TMBG concert and got engaged at a later one. Oh dear. This revelation is followed by the Johns getting a cake as a present from some fans: “We love you more than fudge. That’s why you get fudge.” Hmm. Nor should I neglect to mention the ubiquitous James K. Polk, the Giants’ favorite obscure president, who Schnack shockingly reveals to have been an incorrigible wife-neglecter.

The movie is not short of funny quotes either—socially enlightened Sarah Vowell digressing on whether ants are insects, for instance. Flansburgh’s contribution is significant: “It’s like being the world’s tallest midget” (on his fame in the American indie scene) or “Our record has 19 songs instead of the usual 10, which is why our record is better” (on the release of their masterpiece Flood). Schnack even wheels out a ventriloquist for the occasion—Raoul Rosenberg, whose dummy, Julius, was the reported inspiration for the song “Put Your Hand Inside the Puppet Head.” Mercifully, he chooses to expresses himself via his own mouth just this once.

However, Gigantic itself should not get all the credit for such inspired nonsense. Yes, it’s bound to be indie, witty, bizarre, artful, a cross between Sesame Street, etc (see list of adjectives above) if TMBG and acquaintances are in it. But the documentary’s only intrinsic merit is probably to introduce us to TMBG from a close friend’s perspective and to leave us thinking “yes, these guys are nice, aren’t they?” Schnack tells us: “Hi, these are my mates John and John; they’re not cool or anything but they are nice, honest men and they like wearing check shirts like your brother.” Beyond this, Gigantic is just a vehicle, a bland report that fails to rival TMBG’s creativity. Not that there’s anything wrong with this per se; you will like it if you like TMBG. But you won’t if you don’t. And there are other approaches to music documentaries; still fresh in my mind is Michael Winterbottom’s latest film 24 Hour Party People, Tony Wilson’s walk through the ’70s and ’80s Manchester music scene, a life-enhancing experience more than a documentary.

However, I was clearly alone in entertaining these thoughts at the MFA. The happy clappers would not stop laughing and gushing, even when things were just not meant to be funny. Of particular note in this regard was the apparent hilarity of the blank screen which endured for about a minute halfway through the movie (caused, presumably, by some minor technical problem).

Final proof that TMBG and their fans are on different planets (at least as far as humor is concerned) came at the post-movie question-and-answer session with the director and the band members themselves. The nerdy technical questions (“What kind of camera did you use? Which song do you like playing best? What’s your musical education?”) were followed by a number of evangelical-Christian-style personal revelations (“You guys have changed my life,” etc). Of course, these were not really questions at all, but they did provoke sympathetic answers all the same (yes, TMBG are nice). I managed to endure this spectacle with nothing worse than curled toes of embarrassment. However, I really lost my patience when someone asked, “How has 9/11 affected your creativity and are you planning to write any songs on the subject?” Oh, yes, like “I Saw My Baby Wearing Osama’s Beard.” They might even be able to fit in the Cod Caperers’ Korean dish under the axis-of-evil theme if they could establish its origin north of the 38th parallel. But such is TMBG’s infinite patience that they confined their answer to a few gentle “no”s.

The real cat’s meow, though, (such that it deserves a paragraph to itself) came out of the mouth of some lady who had seen them live the previous day (and should therefore be regarded as a fan, according to standard criteria). “Are your songs intentionally educational?” she wanted to know. “Is there an anti-substance abuse message in some of them?” Anti-substance abuse?! The poor Johns could only manage: “No, in fact we are drunk right now.” Even saints, it seems, are sometimes driven to the bottle.