“Don’t be skittish.” Chef Jason Cheek was encouraging a young couple to sample a piece of the mysterious meat mixture laid out in small dishes on the table. The red sauce and cherry garnish gave the food a gruesome appearance of oozing blood. Behind him was an equally curious scene. Oblong, blue, wooly-looking creatures of various sizes worked in the restaurant. One stood at the host stand and welcomed visitors to the café as another dragged a hapless victim across the floor. On the counter just above, one of the creatures fed a person into a grinder, and off to the side, another cooked up the ground chunks of human while two more creatures dined at a table. It was only after the couple ate their samples that Cheek began to list off the ingredients his creation contained—”Chicken livers, pig’s head, calf brains…” 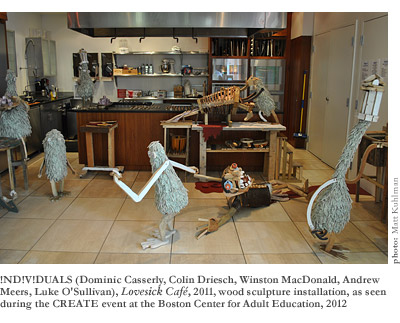 While it may sound as if he perpetrated a cruel, surreal practical joke, Cheek’s organ meat terrine was actually inspired by the art installation behind him. On Sunday, June 3rd at the Boston Center for Adult Education, he was a participant in CREATE, an event organized by Storyville chef Louis DiBiccari, in which six chefs were paired with artists and asked to make a dish inspired by the artworks. Chef Cheek, of Toro, was paired with an installation titled Lovesick Café by the Boston-based collective !ND!V!DUALS. The creatures and components of their installation are constructed out of found wood and imbued with such a high amount of quirky, cartoonish energy that it transforms the grim subject of serving people as food into an interesting, even funny scene to explore. Wooden representations of bones fill a sink, also built out of wood. Two ends of a skateboard stuck together form the plates for the restaurant. Knives and forks made of wood sit lined on the counter, and the wooden stove is fully equipped with four burners, gas dials, and even a handle for the oven door.

“I think that’s a really big part of why our work is successful—because when we do these installations we just have endless accessories and there’s a thousand different things to look at,” said Colin Driesch, a member of the collective, when I asked him about Lovesick Café. “We’re pretty good about not leaving out any details of what would be in a room.”

A nebulous group formed in 2003, !ND!V!DUALS is composed of five members: Dominic Casserly, Colin Driesch, Winston MacDonald, Andrew Meers, and Luke O’Sullivan. They shared common links to each other through friends as well as Casserly, Driesch, and Meers attending the Massachusetts College of Art and Design. (MacDonald attended Boston University; O’Sullivan, the Rhode Island School of Design.) They have developed a unique brand of sculpture using found wood that continues to reach new audiences and grow in magnitude.

The project that sparked the collective’s current artistic path occurred in 2006 at the Bonnaroo Music and Arts Festival in Manchester, Tennessee. O’Sullivan was among a group of students taken to Bonnaroo in 2005 by Bowdoin College art teacher John Bisbee to create public art installations out of found materials for the campsite areas of the festival grounds, called pods. The following year, O’Sullivan was accompanied on the trip by Driesch and Casserly. The three of them created a treehouse as their first collaborative piece. And in the true spirit of the ideals that have come to define the work of !ND!V!DUALS, it was a spontaneously conceived and executed project, all in the name of fun. 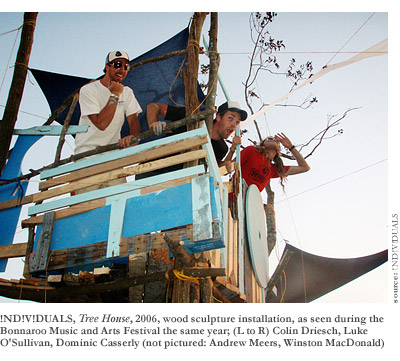 “I’m pretty sure John had an idea of what he wanted us to do, but we just had a completely opposite idea,” Driesch said. During his monitoring visits, Bisbee would question what the group was building and try to steer them back on course, only for them to continue building the treehouse the moment Bisbee was out of sight. “He kept coming by, and by the end of it I think he just gave up, and we had this awesome treehouse,” Driesch said. The group’s persistence paid off, as Bisbee recognized the value of what they did and continued to invite them back. Through subsequent years at the festival, they began developing the large animal forms that now often populate their pieces, and eventually Bisbee offered them an exhibition at the Coleman Burke Gallery in Brunswick, Maine. From that beginning, the five artists have continued to increase the frequency and scope of their production into a recognizable branded aesthetic that arises out of cartoonish doodles, resulting in work that can bring the child out in anyone.

Improvisation, spontaneity, and cooperation are essential themes with !ND!V!DUALS, right down to the structure of the collective itself. Since each member has his own independent job and life, it isn’t always possible for everyone to be present at the same time. While Driesch installed portions of Lovesick Café for CREATE, O’Sullivan was in Philadelphia, where he moved eight months ago. MacDonald was on the beginning leg of a three-month cross-country bicycle trip. Meers was in Carbondale, Illinois, where he attends graduate school for bladesmithing. And Casserly was at Bonnaroo heading up this year’s installations. Despite the difficulties that can arise from having a loose-knit group, !ND!V!DUALS continues fulfilling demanding projects.

“There’s always enough people willing to lend a hand that we can get things built in crazy deadlines, and ultimately it’s a lot of fun,” Casserly said, explaining how sometimes elaborate installations like Lovesick Café are constructed in a period of two weeks or less. “No matter what !ND!V!DUALS ends up being, we’ll always be doing it,” O’Sullivan said. “For the most part, we all do more focused things on our own, whether it be photography, video, sculpture, or drawing, and when we get together it’s kind of playtime for everybody. It’s a social experience, which I don’t really get from my own studio work, which is what I love about it.”

The group’s sculptures all possess an inherent crudity by being made from scrap pieces of wood, yet achieve a high degree of sophistication through the amount of attention given to details. Earlier works from Bonnaroo in 2007 and 2008 display a more boxy, incomplete final structure, which is understandable considering they were made on location with limited materials. But as their work has matured, it has reached a new level of refinement in not only the individual components of the installations, but the immersive environments the components generate together. 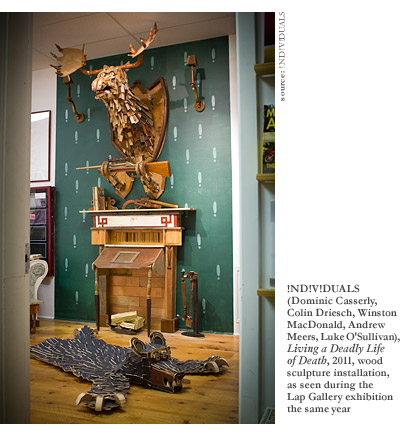 In Living a Deadly Life of Death, an installation at the LAP Gallery in 2011, the group constructed an entire rustic den setting complete with a mounted moose head on the wall, decorative guns on display racks, a fireplace, a bearskin rug, a bottle of whiskey, a pipe, candelabras, and an easy chair with an open book on the armrest, all made of reclaimed pieces of wood. Completing the convincing environmental feel of the installation are screen printed patterns on choice parts of the work, such as cartoonish wood grain on the square logs in the fireplace and a wallpaper pattern on the wall. Silk-screening is also a prevalent technique in Lovesick Café, originally completed in 2011, with the small blue slats of shingled wood that create the fur on the creatures, as well as the lines and color on the cubes of ground meat they consume. Done mainly by O’Sullivan, these small areas of surface adornment enhance the environment with a layer of visual interest while allowing the raw materials to still dominate the work.

Moving forward, !ND!V!DUALS seems poised to reach greater heights in creating immersive experiences for viewers. Their work took a strong participatory turn in CREATE with the pairing of cuisine, and since the organizers hope to make it an annual event, it is entirely likely that !ND!V!DUALS will be seen with food again. Their contributions to Bonnaroo in 2011 included a life-size replica of a Volkswagen bus—in wood, of course—that people backstage could sit in with friends alongside wooden monkeys that inhabited the vehicle, and a replica of a sunken pirate ship with the bow and mast poking out of the ground amid cargo crates that have “drifted” off the deck. These works, along with others completed in the past couple of years, establish a new kind of dialogue with viewers that may hint at upcoming projects.

A recent grant received from The Awesome Foundation will fund an installation in the front windows of Lorem Ipsum Books in Cambridge. The final design undetermined as of yet, Driesch pulled out some stray sketchbook pages and sketched-on pieces of wood to show a few ideas for the space, which involve owls and other woodland critters making books from trees in the forest. For another project, the group has been invited to do the interior decoration for a friend’s restaurant in Lawrence, Massachusetts. 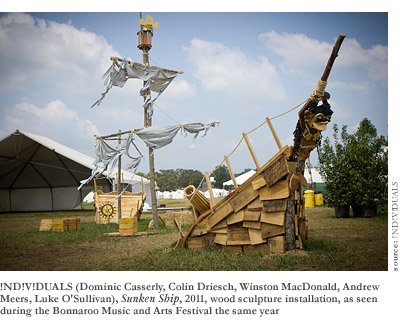 “I can’t even imagine… this place is going to be wacky!” Driesch said of the opportunity to have full creative control over the interior space of a functioning business. He mentioned that viewers ranging from 3 years old to 90 get excited about seeing their work, and creating things that are accessible to a range of people is what makes it exciting. It is perhaps this desired accessibility that is driving the group’s projects toward permanent installation works and away from the gallery setting.

“We’re going to do both. If a project is worth our time and it offers creative, artistic growth, then we’ll jump on it,” O’Sullivan said. “Hopefully the commercial opportunities come from businesses seeing our work and wanting it, and not from us trying to change our work to fit what they want. Luckily, I feel like our work is pretty approachable, and in that sense we can remain pretty true to what we want to do within a commercial project.”

Of all the projects on their plate, perhaps the most important to the group itself is the Snalligator (a combination of “snake” and “alligator”), a speakeasy made in an old trailer that Casserly found on his new property out in the country.

“I found this trailer and had the idea of making it a hangout spot, and I thought ‘what better place to build some work?” Casserly said. “Partly it’s the idea of creating a home base and having our own space to bring people for meetings or show work, but also after parties and gatherings for creative opportunity like a music show,” O’Sullivan said. “It’s something that we’ve always thrived on—just having the space to get together, because that’s where the ideas are born, and that’s where the fun stuff happens.”

No matter what !ND!V!DUALS does in the future, fun will definitely be in the equation, as it has been the driving force behind everything they’ve produced through the years. As long as people still have a soft spot in their hearts for Saturday morning cartoons, building forts, digging in the sand, and doodling in the margins of a paper, there will be an enthusiastic audience.