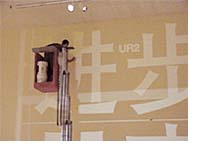 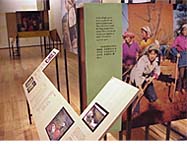 Yunnan Province, a mountainous area bordering Tibet, Laos, and Vietnam, is removed from the traditional hubs of Chinese power. This diverse agricultural region is the focus of the Davis Museum and Cultural Center’s current exhibit.

The images shown in “Village Works: Photographs by Women in China’s Yunnan Province”, began with a project called Photovoice, a Ford Foundation-supported initiative that taught 62 village women, aged 18 to 57 years, how to use automatic cameras. For one year in 1992-93, the women took photographs of their lives; what resulted was a life-changing experience. The vivid images were documents of rural life, and became the basis for discussions with local leaders about changes in policy to improve conditions in the province. 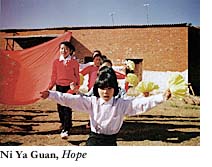 It was a challenge for the Davis Museum to craft a presentation for the images that is as unique as the images themselves. To accomplish this, the Museum called on Pentagram Design Inc. The exhibit includes specially constructed pavilions that are shaped like Chinese characters. These kiosks function as both display units and sculpture. The photographs have been digitally reproduced on satin and paper, and have been integrated with the wood and metal structures that rise throughout the room. And large Chinese characters have been painted on the walls by the Beacon Hill Artisans, providing a backdrop to the edifices within the space. 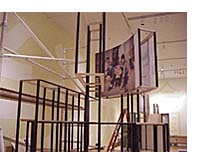 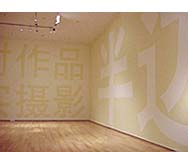