In the Director’s catalogue statement, Peter Timms describes Fitchburg Art Museum’s fifth New England/New Talent biennial exhibition as “a rich visual feast.” It can’t be a coincidence that five of the hosted eighteen regional artists had incorporated food or food-related issues as their subject matter. 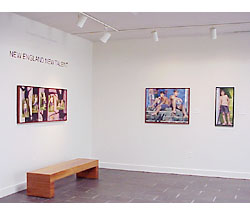 As you enter the show, you are greeted by Jayne Adams’ paintings of adolescent boys. Adams indicates relationships between this band of “merrymakers” in her technique of drawing frame within frame and refocusing the intensity of color of flesh against earth and sky. With photographically influenced elements in proportion, format, and in the planes of the faces, Adams’ Chainlink crops the head of a central character. In another work, two boys are languidly seated in the foreground only to be upstaged by a headless torso standing in the upper lefthand background corner. Images that could have been fresh wind up being disrupted and strange in composition.

In the Simonds Gallery, Kathleen O’Hara’s 15″ x 15″ panels suit the scale of the space. One piece will whet your appetite but a few more wouldn’t hurt. In this installation of panels, their proximity strengthens the semantic relationship of the work. Calendar, the image chosen for the catalog, is O’Hara’s chattiest work in the conversation.

O’Hara’s conversation pieces have a scale that is comparable to Kathryn Frund’s assemblages. Frund’s work seemed a bit lost in the main gallery and would have served as a terrific companion in the smaller Simonds Gallery. Her assemblages include skies that usually turn up in the work of Robert Ferrandini and Cheryl Warrick. Frund finished her assemblages with black edges and red calligraphic marks, a considerate departure from the wooden knot holes, ragged canvas, and staple-filled edges that are displayed by other participants.

If you wanted to see Steven Halpern’s work, you’d pass through the Simonds Gallery and head to the emergency exit. It was difficult to access what appeared to be competent, soundly executed paintings. Halpern’s gridwork paintings were lit by a skylight and one lamp and flanked the exit, making the door the centerpiece of his work. He could have hung between the Wallace and main galleries where there were lamps on blank walls and an ample window at the end. What did he do to deserve this? 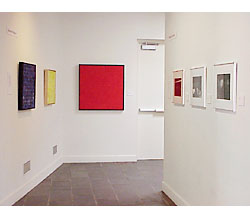 Leftover from most artists’ salad days, the pursuit of abstraction turns up as academic sustenance. Lisa Occhipinti, Mary Hutchins, and James Kennedy each revel in an abstract anecdote. Occhipinti’s tale mildly pursues mark-making gestures and surface while Hutchins’ embellishes the mark-making with a vibrant palette.

Finally, James Kennedy’s weighty artistic statement tries to balance “spontaneous improvisation” and “carefully planned and deliberate action”, as evident in his large, thinly coated, flat paintings. His works wind up drawing my attention to the ventilation grates two-thirds of the way down the wall.

According to Nancy Diessner, her images attempt “to lead us to something more lasting, more meaningful and enduring than the dull fact of simple circumstance.” The four highly crafted folded books represent the highly articulate stories contained within. Two books contain digital images and two the artist’s own imagery. Unfortunately, the division in these pieces enforces a comparison. The finalized digital selections hold in the crisp presentation, alluding to her reference of connection, while the artist’s own rendered dark, muddled, sketchy images are upstaged by the sophisticated binding. 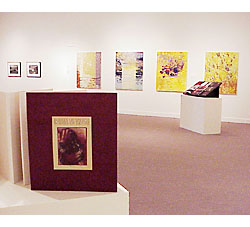 As mentioned before, food is an underlying catalyst in this exhibition. Plants and animals are the substitute for the taboo subjects of politics and religion in this dinner conversation. You’d expect PETA or the Humane Society to have underwritten the exhibit instead of BankBoston.

To aid in the transition from abstraction to animism, we’ll start with the sea-based fare of Martha Oldham. Pale renditions of the Long Island clams of Oldham’s childhood are portrayed in Ralph Lauren’s chic oyster paint palette. Instead of the tomato red Manhattan chowder, her colors are more New England cream-based, and they drift easily into the fog of the white gallery walls.

Pete Guenther’s Vermont livestock photos seem inspired by the surrealist filmmaker Luis Buñuel. The eerie black and white work holds a severe focus on the predominantly bovine family, with the token ovine in for measure. The backdrops of dark industrial farm walls, metal gates, and shadows of foreboding figures fuel a grim demise for these creatures.

Diane Dahlke reverently dresses up fish and crabs for their portraits. It’s reminiscent of a child mimicking maternal gestures by dressing up his or her pets. The deftly intensive brushwork even captures the touches of blood on the pristine garments. The viewer could almost expect an adult to walk through the door and tell her to stop playing with her food, with little knowledge of how hard she has been working. 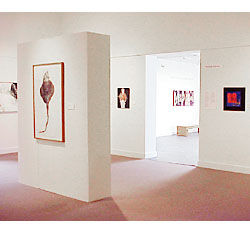 As a vegetarian Lori Schafer wildly enlarges organic vegetables to the size of human torsos. Swollen Beet is an ominous root that resembles the knuckles of a giant’s fist. The scale empowers the “flesh and fiber” subjects to the point of being a threat. If Schafer took on yams, performance artist Karen Finley would have to reconsider their use as a prop.

Paul Cary Goldberg photographs standard objects from the still life tradition including fruit, vegetables, and pottery. The dramatically lit and arranged work is photographed, then printed in the hyper-chromatic Iris Giclee printing process. To Goldberg’s credit, he notes the Iris technician’s name as a contributor; alas, there are no credits to the farmers or crafts persons that made the props. If the viewer were to compare Goldberg’s images to Harnett’s Still Life With a Jar of Olives in the Museum’s permanent collection, it would be like comparing marzipan fruit to fresh produce. We are supposed to be dazzled by the technological replication.

Pamela Ellis Hawkes’ toned silver prints offer an antidote to the marzipan. The distinct tonality of her seascapes sweep dramatically over the plane. This photographer should be working in a grander scale to suit her subject. With a change in scale, the delicate edges would frame the works brilliantly, and she could abandon the redundant mattes and frames. 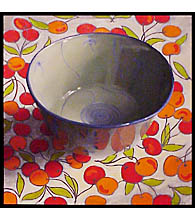 Robert J. Grady offers brightly decorated ceramic jars and patterned cloth surfaces that seem loose, relaxed, and steeped in the nostalgia of tea time. Grady pursues an intense combination of colors and a curious definition of line. Is it a Sunday parlor trick or are the surfaces of the jars and the reflected patterns of the cloth occupying the same plane?

While Grady’s work is of leisure, Pamela Sienna’s paintings are wrapped enigmas. Sienna layers vivid and contrasting colors, binds her objects with twine, then drops in a place card of fires and volcanic scenes. This is no atavistic still life.

With the cosmopolitan inspiration of New York City, Cora H. Roth builds paintings that depart from the canvas. Roth defines an age through piled drops of oil and acrylic, then ignites the work with a highlight of neon. The neon warms the work the way a flame warms a Napoleon brandy. The white paper tape that masks and anchors the necessary electrical cords indicates the host is making due on a limited budget. Roth’s work is sophisticated enough to overcome this hurdle. 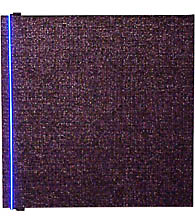 Michael Beatty is accomplished in the media of printmaking and sculpture. Whether presenting the graphite-coated wall pieces of the Blips installation or the elegantly executed monotypes of his Plato’s Chalkboard series, Beatty floats effortlessly between the two media without sacrificing detail or craft. He has a true command of both dimensions in the fashion of an “eau de vie”; it’s wonderful, even if it is brief.

A great deal of effort went into this show, and the staff at Fitchburg Art Museum should be commended. It met the true definition of a smorgasbord. Enough work was presented for two shows; if there had been some editing and changes in placement, some of the visual indigestion could have been avoided.

Even with careful planning, group shows are unruly by nature. Most museums won’t risk assembling them. Instead, they opt for a more established, proven fare of recycled shows and collections that have been a fiduciary success. You can count on them as a staple but they quickly become dull. The exciting variations are discarded or shelved until they become part of the mainstream palate. We should be grateful that there are organizations that continue to support the sincere, brave, and necessary social task of introducing us to something new.