One long weekend in October saw the first, sudden sprouts of what promises to grow into an annual Boston arts experience—the Boston Fringe Festival. So sudden, indeed, were these sprouts that the whole notion of such a festival was conceived only six weeks prior to the event itself, when the Boston Center for the Arts offered local playwright David Valdes Greenwood some space for a reading of his new play. Greenwood responded with a suggestion to “do five,” an idea to which the Center was amenable and which Greenwood followed up with admirable verve, drumming up performers, advertisers, and audiences, and even managing to raise a little money for the Dana-Farber Cancer Institute’s Breast Oncology program. And so was born the Boston Instant Fringe Festival 2001, the world’s self-proclaimed smallest fringe festival. 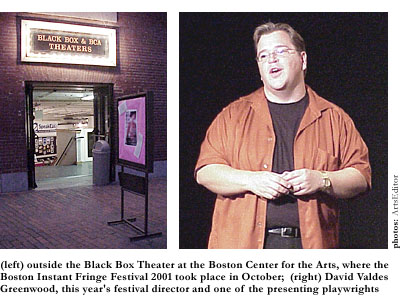 But what is a fringe festival? Lexicographers define it as a secondary festival that takes place at the same time as a mainstream arts event such as the world famous Edinburgh Festival in Scotland. However, fringe festivals may also be defined in terms of the kinds of shows they typically embrace. In his program notes, Greenwood (the festival director) defined these as “anything too small, too offbeat, too helicopter-free to make it big in commercial theater seasons,” and he gave further help to the initiated by tutoring every audience in the three crucial reactions he regards as being characteristic of fringe shows: laughter, gasping, and clapping.

He might have omitted the gasping practice in his introduction to the first show, The All New Old Show by Mrs. Potatohead, without thereby calling into question its fringe-worthiness. For those who don’t know, Mrs. Potatohead consists of three middle-aged, locally-based women (Margaret Ann Brady, Dorothy Dwyer, Lucy Holstedt) who present various comedy sketches and songs with the general (if frequently strayed from) theme of aging. Such shows as this tend to proliferate at fringe festivals, no doubt partly because they are cheap to stage, requiring only a minimum of props on an otherwise sparse stage. Of course, theater can also be staged in this minimalist way, but it is arguable that comedy loses the least by being confined to a small, impecunious venue since it doesn’t rely in the same way on creating a suspension of disbelief (for the purposes of which proper sets are useful). Indeed, in many ways it gains from the increased intimacy and opportunity for interaction with a willing festival audience. Admittedly this can very easily descend into the cheap comedic strategy of audience embarrassment, but thankfully Mrs. Potatohead steered well clear of that.

Their show consisted of a mixture of classic and new material, hence the title. One wonders, though, how much new material there really was—and how much time was spent preparing it. The first sketch presumably fell into the “new” category, judging by its topical Halloween theme, but it did not seem to live up to the generally high standard of the sketches, relying too heavily on the spectacle of three foolish old women in ridiculous costumes to provide the humor. Nor did the first song appear worthy of its place in the show, reviving as it did the rather tired comedic routine of having a stuffy old professor-type (or in this case a librarian) explaining some aspect of popular culture (in this case rap/hip-hop) in hopelessly dusty, academic terms. One wonders whether these pieces were dashed off and included merely to live up to the festival’s marketing boast that each show was a world or Boston premiere.

But the sketches really picked up in the second half, beginning with the pilot of the Mrs. Potatohead sitcom, allegedly rejected by a TV network after it got cold feet about wanting a change from the usual white, male, middle-class comedy. Despite being a little difficult to follow, on account of the large number of characters and the small number of distinguishing props, it nevertheless worked very well on stage, the characters playing off each other two at a time and managing to get into all kinds of hilarious misunderstandings regarding a packet of Q-tips covered in dog excreta. One can only lament the unnamed network’s lack of programming courage!

The two highlights were, first, the inspired piece of surrealism in which two women obsessively, inexplicably leaf through various magazines and newspapers, ripping out certain pages, crushing them into balls and then arranging them fastidiously on the floor; and second, the observational piece in which a night train stops due to technical difficulties and a woman passenger almost immediately begins to speculate about who in the car she will have sex with in the event of a disaster. It seems that this kind of comedy, usually plied by festival-flocking stand-ups, works best when it points the spotlight at thoughts that we all have but on which none of us subsequently reflect—idle, absurd daydreams that drift through our heads when we are otherwise unoccupied and which instantly disappear into the mental ether. And I have to admit that I have ridden the train of thought about post-nuclear re-population myself…

The next evening consisted of two shows. The first was a disparate set of three short plays, all minimally staged and involving actors with scripts in hand. I confess to having found the first—a five-minute, two-girl poem by Renita Martin (The Way Home)—to be largely incomprehensible, as apparently did the majority of the audience. The second, by contrast, brought the house down. This was Melinda Lopez’s Alexandros, a tragicomic depiction of a Hispanic family’s emotional hypocrisy, set during the senile, widowed grandmother’s birthday party. This occasion, already something of a sham on account of the fact that the guests no more want to be there than they want the old woman to live with them, is further soured when the grandmother’s dog—her only companion—dies on the bathroom floor. This gives rise to a hilarious but ultimately unsuccessful attempt on the part of the younger generations to disguise the tragedy from the birthday girl and avoid coming face to face with her loneliness. 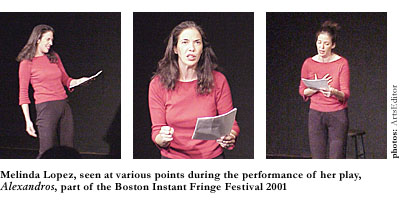 Lopez’s performance was very much a mere “reading”—she played all the characters herself and made frequent recourse to the script. Nevertheless, due to her exceptional ability as an actress, it arguably added up to the most vivid piece of the entire festival, making up for the lack of visual stimulus by a skillful prompting of the imagination, like the best radio plays. It also served as a fine example of another fringe tradition—the one-man/woman show.

The third play of the set, Mary-Ann Greanier’s Relics, started out as a very humorous piece about a young Catholic girl, Dolores (Hayley Goldbach), who prays to Mary for stigmata and who brings tomato ketchup to church in order to show the Virgin how much such wounds would suit her. The tone, however, suddenly blackens as a mysterious (and somewhat wooden) priest (David Reiffel) turns up in the church and, after careful questioning, discovers that the reason Dolores is so desperate to take on the pain of the suffering is because her mother beats her, ostensibly for being a “disgrace to God.” The play ends with the revelation of the self-inflicted knife wounds on Dolores’ forearms, displayed to the audience in a pose of messianic beatitude, like Jesus on the cross.

Shocking (gasp-worthy) though the piece was, I personally found it rather unsatisfying, partly because of the imbalance of tragic and comic elements (all of the latter being compressed into the first half of the play), and partly because it ended just when things were starting to get psychologically interesting. There could have been much more exploration of the reasons for the mother’s abuse and the child’s retreat into religious fervor and self-mutilation; left thus underdeveloped, a lot of the potential impact was lost.

Not to be outdone, Greenwood then presented his own attempt to invoke the audience’s laughs, gasps, and claps. He did this by way of his latest play, Wonderland, a sprawling, blackly-comic monologue piece about a homosexual Hollywood star, Curtis Cook (John Porell), who remains defiantly in the closet even when the wood is splintering all around him. Due to its largely verbal, as opposed to visual, emphasis, the play lent itself very well to the low-budget setting. Moreover, the larger-than-life characters were read very well by the almost full cast. Of particular note was Dan Goldrick’s interpretation of the small-town, adolescent “head cookie” of a fans’ Web site, who worships Cook for, amongst other things, his utterance of the macho put down (a refrain throughout the play)—”you dumb fuck“—in one of his movies. 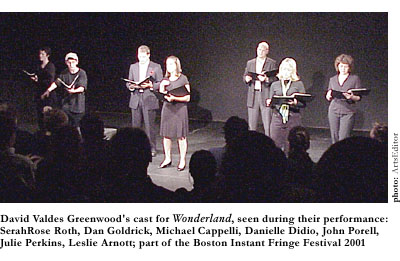 Nevertheless, Wonderland had considerable faults. First, it was overly long, with too many superfluous (if frequently funny) lines. Second, the feminist angle about the different sexual ethics to which male and female stars are expected to conform is rather hackneyed and only distracted from the main theme which I took to be the objectionable hypocrisy of famous people who refuse to publicly admit their homosexuality. Third, in its rather sensationalist revelation of Cook’s pedophilia, the play seemed to go overboard in its determination to ram home the message that he is a corrupt and wicked man. Surely the hypocrisy of his dogged denial of homosexuality would have been just as blameworthy even if he hadn’t had a predilection for little boys. Indeed, the revelation of his pedophilia only seemed to obscure, once again, Greenwood’s main theme, since it invited the audience to link Cook’s pedophilia to his homosexuality, grouping them both under the heading “perverse sexual preferences.”

All in all, the Boston Instant Fringe Festival gave the impression of being a mere taste of things to come in subsequent years, both in terms of the rehearsal quality of its productions and in the smallness and relative obscurity of its occurrence. True, it did not aspire to be anything else (as the program notes made clear) but one can’t help wondering why Greenwood didn’t wait until next year, by which time the actors could at least have learned their lines, obviating the need for him to excuse the scripts in their hands. Perhaps he could also have signed up a few more venues, allowing for more productions and perhaps for some plays to be shown more than once (thereby making them more commercially viable and, potentially, less minimalist). Alternatively, one may ask why he didn’t invite contributors to present previously staged (and rehearsed) pieces. Why the insistence on every show being a world or Boston premiere? If the answer is that the festival’s intended audience was people who have seen every previous production by the writers involved, that is something of a shame. Surely part of the point of any festival, fringe or mainstream, is to reach out into the community and attract people who do not normally go to the theater.

But one should not be too churlish. Prematurely born it may have been, but the 2001 festival still entertained its audiences and introduced them to many of the time-honored fringe elements. It was also refreshingly free of the rampant commercialism that many critics feel blights the big fringe festivals, undermining their original commitment to dealing with controversial subjects in challenging ways (and at affordable prices). It is to be hoped and expected that next year’s Boston Fringe Festival, which promises “more shows, full productions, and the welcome addition of fringe elements in dance, music, and all kinds of performance,” will preserve this year’s homely, not-for-profit quality while at the same time acquire some of the production values of a larger event.