One gets the impression that Antonio Cruz and Antonio Ortiz—known as Los Monchis in their native Spain—do not like to talk about their own architecture. Nor do I say that merely because Cruz failed to appear for their scheduled public lecture at the Harvard University Graduate School of Design in April, leaving his long-time partner and fellow son of Seville to grapple with English pronunciation alone. No, their reticence is there for all (not) to see in the exhibition of their work that the lecture inaugurated (showing at the GSD until May 21). Specifically, it is to be found in the exhibition’s startling minimalism—in the almost total lack of verbal annotation to the relatively small collection of beautiful wooden models and black-and-white drawings on display. One can also hear it in many of Los Monchis’ past statements—if not in their oft-repeated fondness for Nabokov (whose belief in the autonomy of art is well known), then unmistakably in their remark that “an architectural work should be self-explanatory.” 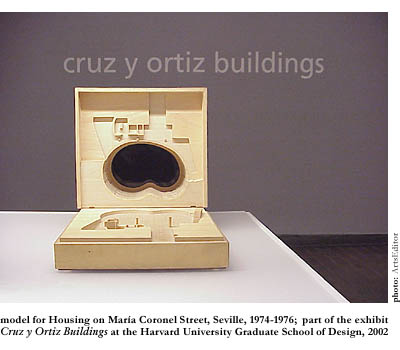 Another salient characteristic of the “Antonios” is their famed modesty and dislike of public attention (a characteristic they possess in stark contrast to many of their peers at the top of contemporary architecture’s totem pole). And at first glance one might be tempted to see that trait as reflected in their buildings. Take, for example, their hot-off-the-drawing-board scheme to remodel the famous Rijksmuseum in Amsterdam, which explicitly seeks to focus visitors’ attention on the exhibits rather than the architecture that shelters them from the elements. Or take the distinctly unarresting, unadorned rectilinear walls that their own buildings often present to the street on which they are located—façades which belie the dazzlingly unconventional, frequently non-rectilinear geometry that characterizes their more private spaces.

There are many examples of such buildings in the exhibition. Most well known, perhaps, is the seminal housing project in Seville, centered around a kidney-bean-shaped courtyard, which sensationally launched their career in 1974. (This building is fittingly depicted in the exhibition by a simple wooden cube which one can open to reveal the courtyard hollowed out inside.) Another arresting example is the visitor center to a national park of sand dunes in Doñana, Spain (1999-2000), with its fractalesque rear elevation projecting, seemingly at random, into the surrounding dunes, like gnarled old fingers raking through the sand. The idea is even applied to the Seville Olympic Stadium (1997-2000), whose many-cornered exterior belies the pure, perfect oval within. And it is taken to its extreme in the Spanish Pavilion at the Hannover Expo 2000, whose dark, monolithic façade, broken only by a few narrow, irregular fissures, conceals a startlingly light, open, and precisely configured interior, the paradox of whose existence is only resolved for the visitor when he goes upstairs and looks out from the galleries, which the exterior fissures delineate.

One could liken such hidden architectural treasures to the dazzling crystals to be found (by the initiate) inside the dullest, grayest of rocks. The fanciful might even be tempted to see them as analogous to the concealed jewels of invention and imagination that evidently lie beneath Los Monchis’ unremarkably dark-suited exteriors. Yet rather than explicating these buildings in terms of some pretentious vision of humanity whereby everyone is credited with possession of such inner beauties, Ortiz simply talked in terms of providing visitors to these buildings with a good, old-fashioned surprise. One does not, then, need to be a poet or philosopher to understand Los Monchis’ intentions; one needs only to take a few moments to study their floor plans (for which reason Ortiz referred to this subset of their output as “plan buildings”). The drawings and models in the exhibition, then, are self-explanatory after all.

But can’t we still see the Antonios’ humbleness reflected in their designs—albeit unselfconsciously? Well, perhaps such a theory might be sustainable in connection with the buildings mentioned above. But there is, for example, nothing particularly modest or concealing about the eye-catchingly fluid, undulating elevations of the Huelva Bus Terminal in Spain (1990-1994). They do, admittedly, present a certain contrast with the precisely circular inner courtyard, from which the bus bays radiate like spokes in a wheel (for which reason Ortiz grouped this building with the other plan buildings in his talk). Yet the building gives the overall impression of constituting an organic whole—like a fossil of an ammonite—rather than a deliberate dichotomy of geometries.

Moreover, modesty is surely one of the last concepts one would reach for in connection with the majority of Cruz and Ortiz’s “section buildings”—so-called because the essence of their design can be grasped by studying their cross-sections (usually because their plans are pre-ordained by their use). Take the railway stations at Basel, Switzerland (1997) and Seville (1988-1991), for example, with their roofs that rise and fall seemingly at random, like economic statistics, providing dramatic architectural journeys for the traveler passing through the contrasting spaces beneath them. Or take last year’s residential blocks in Lisbon, Portugal, with their similarly bold rooflines that drop from their maximum eight-story height like two square root symbols spliced together. 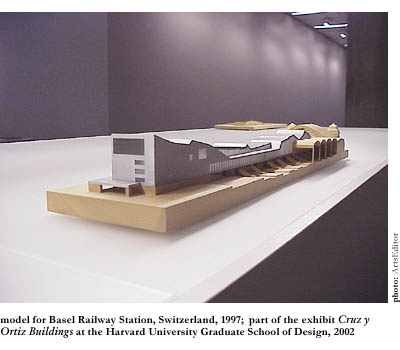 Meanwhile, their most instantly recognizable building—the Madrid Track and Field Stadium (1989-1994)—is positively iconic in the boldness of its architectural vision. That vision consists of a monumental oval grandstand projecting out of the flat Castilian landscape at forty-five degrees, like a discus embedded in turf. And, indeed, such iconography was precisely the point of this project: Los Monchis set out to provide some focus, visible from miles around, to an otherwise desolate area on the edge of the city.

But this leads us to a possible criticism of Cruz and Ortiz—namely, that their buildings are overly image-conscious; that their focus on making one single, simple architectural statement, whilst seductive to the editors of architectural journals, amounts to somewhat cheap, gimmicky design. Their success and fame, the accusation goes, stems from the arresting, definitive, and widely reproduced photographs to which their buildings lend themselves, rather than from the innate quality of their overall design.

Well, their buildings are certainly very photogenic—and not merely on account of the gorgeous Spanish sunshine in which so many of them bathe. Yet, on balance, it seems uncharitable to accuse the Antonios of cynicism when one could, instead, attribute to them the sincere aesthetic conviction that, as Hans Poelzig supposedly put it, “a good project is one that can be drawn with urine in the snow” (or the sand, perhaps, in their case). It seems to me that they also deserve credit for their famed loyalty to the guiding ideas of their design—to their initial, intuitive, back-of-a-beer-mat reactions to design briefs (many of which are included in the exhibition, as if to illustrate this very point—their rough quality contrasting with the minute precision of the models). If Los Monchis’ buildings, in real life, often give the impression of looking like oversized architectural models, it is only because they fight uncommonly hard to prevent structural engineers and quantity surveyors from watering down and complicating the original clarity and simplicity of their designs. And, as Ortiz remarked to the massed ranks of Harvard design students in his audience (for whom he and Cruz had just finished a stint as visiting design critics), this is a fight in which every architect worth his or her salt should engage in. 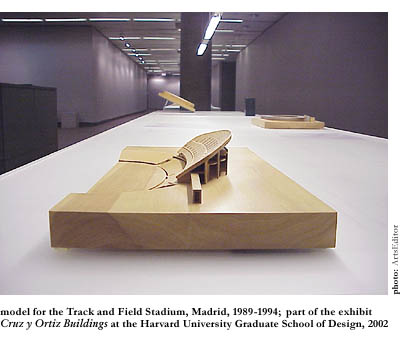 In fact, it seems clear that Cruz and Ortiz design with very few conscious intentions in mind. When questioned at the end of the lecture about their approach to design briefs, Ortiz emphatically denied that it is formulaic, insisting that it has only been recently—and in hindsight—that they have attained some kind of insight into the patterns of design that can be traced through their career. And, indeed, much of that insight seems to have come by way of a third party—namely, the commentator Francisco Mangado, who wrote an article about their work for a recent monograph.

Yet it is arguable that such a lack of self-consciousness amounts to a considerable asset in an architect, since it invariably translates into a lack of dogma or prejudice in design. Certainly Los Monchis do not labor under any such burdens; as they have previously remarked, “we are not interested in showing or illustrating any determined principles.”
This means that they are free to let their architectural intuitions have free reign when responding to a design brief. They are free to choose the volumes, materials, and structures that best solve the problems with which they are confronted, rather than being wedded to any particular solution before they start—which may or may not be ideal.

Of course, in lesser architects this free reign could result in tawdry genre-hopping and postmodern superficiality of design. Yet the great strength of Cruz and Ortiz is their quintessentially architectural ability to synthesize all the disparate practical and artistic inputs that inform the design process and produce a building that charms both users and fellow architects. As Ortiz remarked, design is complete when all these elements—form, function, and structural viability, to name but three—come together. Recall, for example, the Huelva Bus Terminal: it is elegant, beautiful, remarkable and yet, at the same time, wonderfully functional and logical given the awkward triangular site with which the architects were faced.

Yes, the genius of Los Monchis consists of their ability to apply art to practical problems without thereby compromising either the sculptural purity or the functionality of their designs. Their evident fascination with geometry and structure—a fascination they share with every born architect—is applied organically to the requirements of their clients, avoiding any awkwardness or gratuitousness in the final blueprint. The result, as was remarked in the introduction to their talk, is that the best of their buildings seem almost to constitute the inevitable solution to the design problem with which they were faced. And there can be few greater compliments paid to an architect than that.