It’s been four years since the original DVD of the 1979 Roger Corman-produced opus Rock ‘n’ Roll High School was released. In 1997, the DVD market was much different than it is today, with most studios still just testing the waters, their discs being featureless and of mediocre quality. That is why it was a pleasant surprise to see that in such an early phase of the medium’s development, Lumivision had packed this disc full of enjoyable features. Like all good things, it would not last; the DVD would soon go out of print and re-emerge from another distributor, only to be pulled again. What looks to be the final word on Rock ‘n’ Roll High School should come out this August from Corman’s own video line, New Concorde. In anticipation of this re-release, coupled with the recent death of Joey Ramone, it seems to be a good time to take a look at the film and its first DVD incarnation. 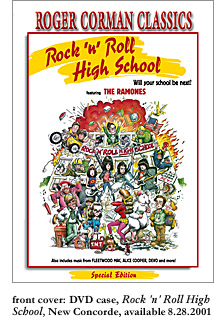 Rock ‘n’ Roll High School is the tale of Riff Randell (P.J. Soles) and her dream of meeting punk pioneers The Ramones. Her brainy best friend/sidekick Kate Rambeau (Dey Young) has much more mundane dreams, specifically getting a date with clueless varsity quarterback Tom Roberts (Vincent Van Patten). Tom, meanwhile, wants a date with the vibrant Riff, and will spare no expense, with the help of wheeler-dealer Eaglebauer (Clint Howard), to get her. This romantic, if awkward, series of events comes to a head at the film’s centerpiece, a Ramones concert. On top of all this hormonally driven hysteria, they must avoid the wrath of Vince Lombardi High’s new principal, Evelyn Togar (Mary Woronov). Her insane vendetta against all things rock puts her head to head against Riff, Lombardi’s student body, and The Ramones themselves, in a climactic uprising reminiscent of the French Revolution. It effectively captures the punk philosophy: the downfall of authority and destruction of property in the name of rock.

The genesis of the film came about in a most convoluted way. Executive Producer Corman wanted a latter-day version of his “wild teen” films of the 50s and 60s, and felt that the best way to adapt to the 70s would be to center the plot on the popular music of the day. Thus the New World production Disco High began. Based upon a story by Allan Arkush and Joe Dante, the film’s screenwriters Richard Whitley, Russ Dvonch, and Joseph McBride developed the script through several versions, under titles ranging from Heavy Metal Kids to Girl’s Gym to a mutation of Disco High‘s title, Rock ‘n’ Roll High School.

Arkush, who would go on to direct the film, tells all about the film’s evolution on the DVD’s commentary track, along with Whitley and producer Michael Finnell. The trio tries to maintain an anecdotal train of thought, but they tend to get distracted when certain elements pop up on the screen. This makes for an interruption in their stories, but it also tends to bring light to otherwise obscure trivia. For example, one of the film’s more memorable sequences, the “paper plane” scene, was developed by the Zucker Brothers, who would go on to direct, of all things, Airplane! (1980). It also reveals that Dante, who helped write the story, got the chance to direct a few of the film’s sequences while Arkush was out of commission with exhaustion.

In addition to the informative commentary track, the DVD also features extended audio tracks from the film’s centerpiece, the Ramones concert, plus the film’s theatrical trailer and two radio spots. The most interesting thing about those spots is that, despite the Dolby Digital Mono soundtrack of the film, they are presented in discrete stereo. The final supplement is an interview between Leonard Maltin and Roger Corman, identical to the one included on the VHS version of the film. Since the upcoming DVD re-release is coming from New Concorde, the company behind the current VHS version, odds are that the interview, as well as all of the other supplements, will be included. The good news is that owners of either of the previous versions will not have to upgrade, as is often the case these days in the DVD collecting hobby. The bad news is that this means the non-enhanced widescreen image will most likely be identical on the new disc—scratches, spots, and all. Then again, if you’re buying a movie from the king of low-budget filmmaking, you’re probably not looking for reference-quality video.

The only reason to upgrade that I can think of is the oft-overlooked factor, the disc’s packaging. Lumivision’s 1997 release came in a square jewel case, the kind in which nearly all CDs are sold. The price point put it along the higher end during those early days; one expected Criterion Collection quality. In 1999, Slingshot put it out again, along with many of Lumivision’s discontinued titles, in the Super Jewel case, a package that’s popular in the UK, but never really caught on here. The price was also lowered to compete with other studios’ catalog titles. August’s release will most likely be in the standard Amaray keepcase in which the majority of DVDs are released today. With the above features included, it will street with a refreshingly low sticker price, on par with many studios’ budget lines. If this trend continues, expect another re-release in 2003 alongside the public domain cheapies. Barring that, if you missed Rock ‘n’ Roll High School on DVD the first two times, grab it this time around. You may not get another chance.