Douglas Coupland, kick-about literary poster-boy for his generation, will probably always have to live down his most famous novel. Generation X was a cultural touchstone. Many of us read the book, identified with its over-educated and under-motivated youthful Diaspora in search of purer beauty, and elected the young Canadian author as the “spokesperson for our generation.” Since such time Coupland’s books have trammeled pretty much the same thematic tundra, while his characters, by outward appearances have become progressively more shallow. Coupland has a thing for glitz. He likes the kind of shiny surfaces and flashy graphic design that usually disguises a shabby, underdeveloped product. For Coupland, whether a naive idealist or just a well-wisher, a colorful box does not belie an empty one. In his new novel Miss Wyoming, Coupland attempts to reveal the human core trapped underneath the taffeta gowns and rhinestone-studded tiaras of aging beauty queens and, in so doing, dispose the nature of modern American celebrity. 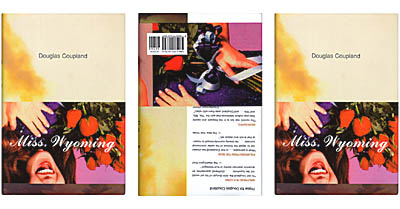 Susan Colgate is the name of Coupland’s beauty queen. Her name itself summons the image of a bright-toothed smile so blazingly white that it blocks apprehension of the person behind it. Behind Susan’s pasted-on smile, however, lurks a life cut short by her aggressive stage-mother, Marilyn, who forces the young girl into the pseudo-maturity of childhood pageants:

Susan’s earliest memory was powerful and clear. She was four and a half, and she was wearing a beaded strapless evening gown … [her] face was heavily pancaked in a manner calculated to add fifteen years to her age. Earlier … Marilyn had clasped her shoulders, looked her dead in the eyes and said, “Only the prettiest and the best-behaved girl gets to win, and if you don’t win, I’m not going to be here waiting for you afterward.”

As she matures, her mother’s blind ambition becomes a source of resentment for Susan. After her youth of pageantry, Susan moves into an adult life of sit-com stardom and rock-star wifedom (a la Valerie Bertinelli). Mother and daughter become entirely estranged. Coupland depicts Susan’s life as a series of disappointments and missed opportunities. Her failed sit-com leads her into a failed marriage, and squandered funds result in embarrassing roles in low-budget horror flicks. Her world spirals down from there. When she looks at her life, she sees it only as a series of make-up sessions and press releases. As a result, Susan constantly seeks something (or someone) that can bring healing into her life. Throughout most of the novel, this mystical element remains tantalizingly elusive.

As counterpoint to Susan’s fading star there is John Johnson—blockbuster movie producer and all-around sleazebag. Riding high on the box office success of his most recent blow-em-up flick, John’s life is awash in a Bacchanalian mix of swirling booze, high-priced call girls and prodigious drug use. John seems happy and content; he is making obscene amounts of money. Everything he could possibly want is just a phone call away. There seems no way he can fail. But Coupland, ever the moralist, cannot allow John Johnson such flamboyant indulgence without leveling the righteous cannon in his direction. In the midst of grotesque debauchery, John Johnson lapses into a coma where he has a vision that changes his life. 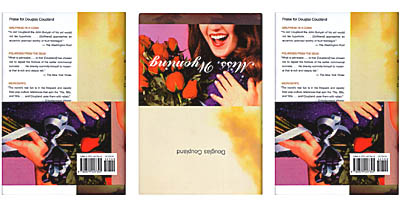 Susan Colgate and John Johnson are converging lines. Mirroring John’s brush with death, Susan walks away from a sudden plane crash without so much as a scratch. She emerges from the twisted metal and ashes of the plane’s fuselage a new person—vanishing from the world that only kept a tentative grip on her celebrity. Seizing this weird occasion, she attempts to create a life of humble integrity. Both Susan’s plane crash and John’s physical collapse are deus ex machina—unrealistically dramatic events that Coupland uses rather unsatisfactorily to forward his plot. The big literary BOOMS force his shallow characters to turn inward and draw on what Coupland would have us believe is a purer self. We have seen this before in Coupland’s work. His last novel, Girlfriend in a Coma, used a character’s prolonged unconsciousness to strip away cultural layers, revealing the remaining characters as shallow, “lacking a central core.” It is Coupland’s hope that merely pointing out this lack will be enough to create profundity where none previously existed. Miss Wyoming follows this tact.

What profundity his characters gain by their respective inward glances is difficult to ascertain. John Johnson’s hospital vision reveals, “John, we’re not here to cut a deal for Canadian and Mexican distribution rights. We’re here to make you better.” But what that “better” is Coupland fails to fully define. After the coma, John Johnson’s life does change. Frankly though, I don’t know what the hell this means. If he is not a debauched movie mogul and is instead a family man who drives an SUV—what then is qualitatively better in his core self? Does this not merely alter his surface, while leaving the original dark and dirty motivations skulking somewhere under the skin?

Susan Colgate, too, craves a new life in which she can be “better” but her New Self leaves deception, death, and irresponsibility in her wake. Her child is born out of wedlock to a much older man who perpetrates mail fraud. When this man, the father of her child and “love of her life” is killed in a tragic and bizzare accident (lots of gods reside in this machine), Susan abandons the scene. She never feels guilt or remorse in this novel; her most common emotions are resentment and selfishness. If either of the characters have something in common it would be selfishness. Both are willing to stop at nothing to achieve what they want from life, and fuck who ever gets in their way. Greed comes in many guises; one can desire redemption in much the same way that they desire money or fame. For Susan and John their salvation is a prize, a gaudy treasure to be put on the coffee table of their lives as a unique conversation piece. If their pursuit of this relic is just as callow as their lives have been, what makes the eventual recovery of it valuable? The book reads like gossip, like a sit-com with a Brady Bunch resolution, only the investment of one’s time is much greater than 24 minutes sans commercials.

Coupland’s essential mistake in this book is to put so much value on the trappings of his characters that he convinces himself that something must be inside the box. Like the Christmas presents my aunt gave me each year; they were elaborately wrapped, but each time I tore open the red and green paper, I was usually extremely disappointed (One Christmas I received a plastic watch that didn’t work). The fact that John Johnson and Susan Colgate are desirous of a better life, that they seek to leave the life of indulgence, is not a mark of a deep soul—it is merely common sense. Why should we applaud characters for merely coming to their senses? There are some funny scenes in the book, some poignant moments, but these don’t add up to quality characters. In the end, I care little about the Hollywood lives of the jaded and semi-famous. If I felt overly concerned with such folk, I could pick up a publication that pretty much runs this same gamut every week: People Magazine.