In the wake of the September 11th terrorist attacks, U.S. residents have faced a challenging new world, which differs from the old in ways too numerous to attempt to quantify. One inevitable outcome has been our perception of the world around us. We look at things in a new light now, particularly within popular culture, where an unprecedented scrutiny of the entertainment industry has suddenly lent new meaning and even controversy to the everyday cultural inundation of words, images, and sounds that were previously innocuous. Producers of film, television, and music have reacted to this scrutiny in the form of postponements, cancellations, and revisions. The tragedy’s impact on the music world has been perhaps the most fascinating and unexpected result, with songs being pulled from airplay for questionable content, and the artists themselves making last-minute changes to their works. Amidst all of this, a closer examination of the album releases of September 11th also seems in order; it reveals many interesting notions about the way we perceive things, and how sometimes what we wish to see is what dictates our perception. 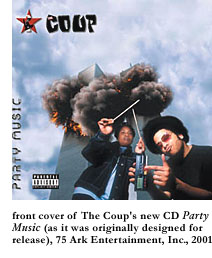 While many celebrities and musicians quickly rallied to the cause with an outpouring of support in a monetary form (like Creed singer Scott Stapp, who contributed $50K to a NYC children’s fund, and rapper Dr. Dre, who donated $1M to the Red Cross), others have contributed with self-censorship out of respect for the victims. One of the first and most notorious changes made to a music release following the horrible events of September 11th was to the cover image of an album by rap duo The Coup, which featured a mocked-up picture of the band’s members, with dynamite and a detonator in hand, standing in front of the exploding twin towers of the World Trade Center. The coincidental design was intended, according to the band, to be a symbolic criticism of the ideals of capitalism, and they were reportedly “deeply saddened” when the image came to life in its nightmare reality. Although advance copies of the album had been issued to the press for review, it had yet to be released in stores, and the cover will be redesigned before it arrives on shelves in November.

New York City band The Strokes removed a song with the line “New York City cops/they aren’t too smart” from their forthcoming debut album, which was released already overseas. Sheryl Crow is rewriting lyrics to a song about there being “no more heroes” on an album she is recording because she feels it is no longer a valid statement. The Dave Matthews Band (whose hit “Crash into Me” has been pulled from many radio playlists) has decided not to release a song entitled “When the World Ends” as its next planned single.

After the horrible events of that day, Kevin Richardson of pop sensation Backstreet Boys made the following insensitive and certainly unpatriotic comments on Canada’s MuchMusic television, later quoted in the New York Post: “I just think we are a little bit of an arrogant nation and maybe this is a little bit of a humbling experience…what has our government done to provoke this action, that we don’t know about?” Richardson later issued a full apology and statement of clarification. Backstreet Boys’ supervising tour carpenter Daniel John Lee was killed aboard one of the planes that hit the World Trade Center en route to Los Angeles, where he was to join his wife for the birth of their child.

International artists have shown their awareness and sympathy as well. Canadian Celine Dion recorded a rendition of “God Bless America.” Irish band The Cranberries have pulled a new music video that was filmed for their song “Analyse,” which featured images of skyscrapers, airplanes, and the chalk outline of a dead body. British alternative rockers Bush have changed the name of their new single “Speed Kills” to “The People That We Love.” Several foreign acts have adapted or cancelled U.S. tour dates, some for logistic reasons, but such does not seem to be the case with British metal pioneers Judas Priest, who have postponed a U.S. tour behind a new album called Detonator. The 2nd Annual Latin Grammy Awards, initially postponed from its September 11th Los Angeles gala ceremony, was cancelled altogether. The bulk of foreign concern in the music world only serves to further prove the truly global effect of the recent terrorism. 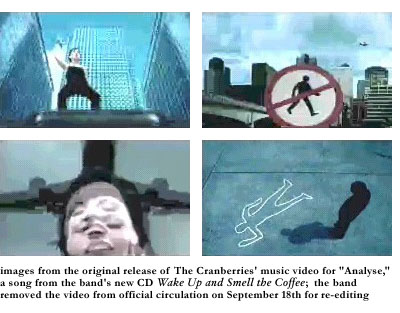 Shortly after the disastrous terrorist attacks, many radio stations began to rethink their playlists. Radio program directors at Clear Channels Communications, the country’s largest owner of radio stations, published a list of more than 150 songs that might be considered questionable following the attacks. The list of recommendations for removal, which was distributed to almost 1,200 stations, includes songs with references to flying and planes (like Steve Miller’s “Jet Airliner”), skyscrapers, explosions, terrorism, and other topics related to death, injury, Armageddon (R.E.M.’s “It’s the End of the World As We Know It”), and even the day Tuesday (Lynyrd Skynyrd’s “Tuesday’s Gone”). Many choices seem obvious, others less so. The removal of songs by Megadeth and Rage Against the Machine seems like a given, but you might not expect The Drifters (“On Broadway”), Peter Paul and Mary (“Leavin’ on a Jet Plane”), or Tom Petty (“Free Fallin'”). The Bangles’ “Walk Like an Egyptian” and songs by Islamic convert Cat Stevens seem to have been included because of their ties to the Middle East. “Travelin’ Man” by Ricky Nelson is most likely included because of the singer’s death in a plane crash. Other highlights of the list include Blue Oyster Cult’s “Burnin’ For You,” The Doors’ “The End,” and Buddy Holly’s “That’ll be the Day.”

In addition to removals of questionable material, radio added patriotic tunes like Lee Greenwood’s “God Bless the U.S.A.” to heavy rotation. Ironically, many of the songs recommended for removal were also in the category of increased “spins,” like Neil Diamond’s “America” and John Lennon’s “Imagine,” which were two of the more confounding choices on Clear Channels’ list. Among the “banned” songs, to which they became incorrectly referred (the list was never intended as anything other than a suggestion—a misunderstanding that caused a good deal of uproar and controversy), were many that seemed out of place. For instance, why Petula Clark’s “Sign of the Times” rather than her song “Downtown”? The random results of these choices show Clear Channels’ list of questionable songs to be itself questionable.

In some cases, it is too late to make changes unless they are retroactive, as was the case with the album releases of September 11th, 2001. Tuesdays in the music biz are new release dates. Tuesday, September 11th, however, was like no other release day, let alone another Tuesday, and after the attacks suffered by this country, a closer look at a few of that Tuesday’s album releases, utilizing the same criteria as Clear Channels, finds some intriguing results.

Slayer’s God Hates Us All, released on September 11th, revisits many of the band’s common themes, mainly death and war, but with a greater vehemence than the thrash pioneers have exhibited for some time. It’s their best record in a while, if not their best ever, filled with unrelenting rage and social criticism in the radically right epistles of guitarist Kerry King. The things that happened the day the album was released, however, lend it a greater resonance than anyone could have ever imagined. The concealed cover photo of God Hates Us All features a blood-soaked bible pierced with nails that, if you connect the dots, seem to have been hammered in the shape of a pentagram. Sample song titles: “God Send Death,” “War Zone,” and “Payback.” Sample lyrics: “Homicide—suicide/Hate heals…strive for peace with acts of war/The beauty of death we all adore,” “Welcome to the horror of the revelation/Tell me what you think of your savior now…Cult of new faith fuels the devastation,” “Hell is home on the concrete where the city bleeds,” “Explosive you feel the impact…you want a war I’m on the front line…get ready for the pain, ’cause this is where it’s going down…madness is coming your way…fuel the fire, bring another victim,” and “I’m the storm/That towers overhead.” After 42 minutes of pummeling, Slayer’s God Hates Us All comes to a startlingly abrupt end with the line: “You were made to take the fall now you’re nothing/Now you’re nothing.”

The Christian rastapunk gumbo of P.O.D. (Payable on Death), more Reynolds wrap than metal rap, could be described as hard-to-swallow, or at least it could were it not for the fact that their mega-popular previous record, Fundamental Elements of Southtown, went platinum. Their easier-to-swallow Second Coming, with the new album Satellite, was heralded by a promotional sticker that featured the date 9/11/01 in big, bold letters. Additionally, P.O.D. have the uncanny distinction of having a Clear Channels “banned” song, “Boom,” from the album released on September 11th. Among Satellite‘s unfortunately timely lyrics: “Who’s to blame for the lives that tragedy claims/No matter what you say/It don’t take the pain away,” “Last day of the rest of my life/I wish I would’ve known/’Cause I didn’t kiss my mama goodbye,” “Call me blind, but I didn’t see it coming/Everybody was running,” and “Fear of the unknown, so scared of my style/Alert the press and address the states of emergency” (from a song called “Masterpiece Conspiracy”), plus lots of cheesy metaphors about the Evil Enemy (bad) vs. Jah (good) that come across as rallying cries for some kind of pseudo-intellectual holy war, and pretty scary in the climate of current events.

Psychedelic art-rockers Mercury Rev’s 9/11 release, All Is Dream, also has its moments of bizarre foreboding, like: “I always dreamed of big crowds/Plumes of smoke and high clouds” (from the song “The Dark Is Rising”), and “What explodes like a fractal/Pops like a lightbulb…What implodes like a Zeppelin/Cracks like pavement” (from “Lincoln’s Eyes”). And on Bob Dylan’s new album, also released on September 11th, he warns “I’m gonna baptize you in fire” in the song “Bye and Bye.” As morbid as it is to be reading these things in this context, it is pretty bizarre how accidentally prophetic one can read the coincidences of these album releases. These findings seem to show that under such fine-tuned inspection, these unlucky albums take on an unfortunate new context and meaning.

The truth of the matter, and the absurdness of Clear Channels’ list, is that any lyrical content can be “read into,” and depending upon how we look at it, we can find all sorts of material that could be brought into question. It really just comes down to perception. It is admirable, and appropriate, that the effort has been made to promote reticence and sensitivity in the wake of the attacks, but ultimately it comes down to perception, and every day when I ride public transportation past Boston’s Logan Airport and see a sign that says “Airport Terminal,” that fact is truly driven home, where it hits hard.