With a title such as Obscenity, Anarchy, Reality, it is a wonder this book found its way out of the hands of black-clad existential types and into the mainstream reading public. I attribute it to author Crispin Sartwell’s compelling writing style. It’s refreshingly honest, personal and direct. 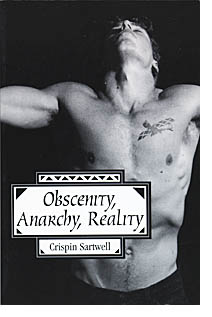 A Penn State philosophy professor and a regular columnist for the Philadelphia Inquirer, Sartwell understands that intellectual ideas remain dormant behind the ivory tower; they belong in the realm of public thought, even if those ideas are sometimes radical and dangerous.

Part philosophical treatise, part social commentary, this work explores the implications of what it means to truly affirm and love life—through the process of pain. Sartwell argues that physical pain is our first link to reality. He outlines it this way: Pain brings us directly in touch with reality. By being in touch with reality, we become real ourselves. By becoming real, we allow ourselves to love and affirm the world exactly as it is, in all its beauty and ugliness.

To Sartwell, love and affirmation are an openness to the world, in the form of a bodily posture and not a philosophy or a system of thought—even if that openness to the world causes physical pain. Pain exhibits shock, which is a calling out from our internal world of abstract thought and into reality.

“The reason that the experience of shock is more compelling than any argument is that it demands recognition that something is happening. From scholars, people who spend lives in a flight from what is really there, a flight to concepts and books and studies, acknowledgement of the reality of the real must be extorted. To drop a bowling ball on your foot is to realize what you knew quite well all along: that reality is opaque, dangerous, and out of your control.”

This idea of shock is less about hurting oneself with a bowling ball or other kinds of self-mutilation. Rather, Sartwell tries to understand pain as we experience it and as it happens to us, by avoiding the temptation towards intellectual abstraction and the need to construct meanings. These abstractions and constructed meanings have caused us to flee from ourselves, our bodies, and each other.

Since many of our traditional values and social institutions are based on these concepts and abstractions, the logical outcomes of this openness through pain are seen in the challenges of both obscenity and anarchy. Obscenity is our abstracted notions of the taboos surrounding the body. Anarchy is our abstracted notions of taboos surrounding the state. Sartwell makes the case for both as a release from the virtual, sterile world of institutions and mores, which do not keep us safe from reality, but more often, perpetuate old hypocrisies and create new dangers.

The ideas in Obscenity succeed when contrasted with our present-day obsession with self-improvement and consumer comforts. We discover a new drug, a seminar, a technique, a consumer device to ward off every bit of physical or emotional discomfort. Drugs such as Prozac aim to take us away from our depression; self-improvement techniques and philosophies compete vigorously to transform what we dislike about ourselves into something new; and with enough money, you can have your entire home and office space ergonomically contoured to enhance bodily comfort. Sartwell is the backlash, which asserts: We go overboard with our escape from pain; there is value in pain.

Where he falters most of the time is not so much the presentation of his themes, but in his arrogant opinions on the great thinkers of the past. Not many philosophers in the Western tradition coincide with his radical ideas, with the exception of Nietzsche, whom is credited as originator of the concept of pain. Yet, other philosophers are completely criticized for their retreat into concepts and abstractions: Plato, Kant, Hegel, Descartes, to name a few. In addition, all major religions that theorize a deity, including Christianity, Islam and Judaism are on Sartwell’s hit list. His arguments lose weight the more one realizes that the time-tested ideas he is casually dismissing are unlikely to collapse any time soon.

Also, several times throughout the book, he steers away from his own notion of confronting pain. The logical conclusion of such a notion would be the natural acceptance of death. In the last chapter he deals with death in this way, calling it the ultimate affirmation of existence. But at another point, he concedes to the value and the benefits of life, pleasure, and play—the forgetting of reality. “All destruction and all creation are desirable if only they can remain playful, for then can they lend us the joy of self-forgetting.” So it becomes fuzzy to the reader exactly when and where pain is the virtue, and when or where pleasure is the virtue. He wants it both ways, which, to follow his original thesis to the letter, would be impossible.

Too often, it is the perspective of one’s life experience that determines the philosophy. Sartwell comes clean and admits that he is no exception. His idea or reality, through pain and suffering, extend from his years of battling personal drug and alcohol addiction. In addition, he had one brother who was shot in PCP-related homicide; another who died of a heroin overdose, and still another brother who went to jail for heroin-driven armed robbery. Sartwell clearly searched long and hard for some kind of meaning to contend with his own experience. The answers he found in this radical philosophy may have been the only way of dealing with his own pain.