Picture, if you will, a small dark music venue on any night of the week. In the crowd gathered at this club, picture rock fans of various ages. Picture fans of rock music of varying genres—from classic to metal to indie rock. Then picture a two-piece band taking the stage, and with the roar of guitar and thumping of drums, imagine watching a tight, intense half-hour of rock and roll. This scenario is not fantasy, but a true experience of watching East Boston’s The Medea Connection [www.medeaconnection.com] roar through show after show.

Boasting two members, Daniel Brockman (guitar, vocals, and effects) and Tanya Paglia (drums, percussion, and gong), The Medea Connection is decidedly unclassifiable. They blend the noise of metal, the quick guitar riffs and energy of punk, and the ethereal essence that is art or experimental rock. Trying to succinctly describe their music is somewhat of an injustice, for they are self-described as being at once “professional, serious, and intense,” as well as “weird, loud, and dynamic.” To be sure, they are some of the best rock Boston has to offer. See The Medea Connection prove this to be true on June 10 at Cambridge’s T.T. the Bear’s, where they will take the stage to celebrate the release of their second album, The Action Noise.

The Medea Connection was formed in late 1996, though Daniel and Tanya played together since 1995. When they began, they weren’t sure of an endpoint, of the path on which they wanted to take their music. These days, they are more sure of a path. When speaking to Daniel and Tanya, any fan of music realizes that they are indeed serious and intense about their band. They have an appreciation for both the craft of songwriting and the dynamism of performing to a live audience. Daniel and Tanya want to make high quality records for many years to come. 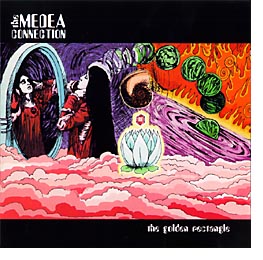 With two self-released albums under their belt, The Medea Connection remembers their 1999 demo, which was, for Daniel, “a terrible experience.” Recording four songs in seven hours was not the rewarding experience they had hoped it would be. Daniel and Tanya were rushed into the completion of their demo, so they decided to approach their full-length album, The Golden Rectangle, much differently. Enter John Bean, an ex-coworker of Daniel’s, who offered up his recording services for The Medea Connection. Himself a drummer, Bean understood the idea of the band and helped Daniel and Tanya to refine their songs into a power-packed album. Naturally, they approached him again with their latest material, the soon-to-be released The Action Noise. “The songs [on the latest album] have a lot more depth and breadth,” says Tanya. With The Action Noise, Daniel and Tanya brought forth a more refined ear for the nuances of production. From listening to their latest release, it is clear that they have learned much, and, in this way, have moved forward as musicians.

The sources of The Medea Connection’s sound are varied. At the inception of the band, Daniel and Tanya decided they wanted to “boil everything down” into punk, or metal, or hard rock. This straightforward approach is done partly out of necessity. With only two members, there is often no room for anything but a tightly controlled set onstage. “We have a straightforward approach to our instruments,” says Daniel, revealing that this was the initial purpose of the band. He explained that he had been in several loosely knit, less disciplined bands before meeting Tanya. For him, her appeal as a drummer centered on her refusal to concentrate on “clever beats that get in the way.” They shared, then, a desire to create well-shaped and meticulously orchestrated music, to write songs that do not just focus on clever beats or on loose, free-flowing “jam” sessions.

Daniel and Tanya never force the songwriting process to happen. “We just let it happen organically,” says Tanya. Sometimes Tanya will write lyrics, then bring them to Daniel, where he crafts the guitar and effects. Then the drums and other percussion are added. Often, most of the time spent in the songwriting process deals with the composing and arranging of a song—the “stops and starts.” “Sometimes,” says Daniel, “the little pop ditties are hardest to write and need more whittling away.” Because of Daniel and Tanya’s attention to detail, songs can sometimes take up to a year to complete. “We always have a new song in the works,” says Tanya, stating that they focus on the elements of crafting and composing songs. Indeed, after a listen to either album, it is clear that they are meticulous in their attention to detail. 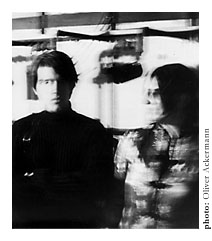 All of this sounds as though The Medea Connection has had a fairly easy time of it. With the recording of two albums, a third in the works, the frequent live shows in and around Boston…all of this leads one to believe that after years of practice, The Medea Connection would be ready to reap the benefits. But, the so-called “rise to stardom” is rarely that, especially here in Boston, a town with far more bands than the venues can handle. And musicians like The Medea Connection are performing in a time when fewer and fewer young people are leaving the confines of their homes to see live music. With the rise of the CD burner (a tool that allows one to record onto blank CDs), fewer and fewer people are even buying CDs. The competition to get a gig at one of the clubs in Boston is fierce. Often, clubs will book a band if large crowds of people are guaranteed to pay to see the band. Many lesser-known but excellent rock bands are refused shows simply because they do not have a large fan base. Bookings are not necessarily merit-based. Let’s remember that this is, after all, the music business, where the so-called “buzz” on a band can propel it to success, even if the music is far from thrilling. The Medea Connection acknowledges that this factor does exist in Boston (though the “buzz” mechanism is certainly not native to this area).

This “buzz” philosophy seems to be a far cry from rock music’s true direction. At its core, rock and roll is visceral and emotional. Solid rock and roll bands should, by nature, not bother to spend their days worrying about the steps one must take to be labeled as part of a “scene.” (“Scene” refers to the several acts that make up Boston’s insular, and perhaps incestuous, rock music world.) Daniel agrees, claiming that rock music “isn’t about a codified group of steps.” Daniel and Tanya consider being in a rock band much more of a qualitative experience. That is, they carefully craft songs, spend virtually all of their time (apart from their day jobs) discussing the band’s future, and invest a considerable chunk of money into the production of albums and rental of rehearsal space. It would be logical, then, to assume that they are part of the so-called “scene” in Boston. The Medea Connection is, self-admittedly, not part of that scene. “We’re not ‘scenester’ types,” Tanya laughs. “We’re not good schmoozers.” And scenes (and the discussion of them) are inherently pretentious. As if the discussion of “who is hot” is one that should really enter into any discussion of good music…but it does. The Medea Connection, however, isn’t concerned with entering into that type of world. Daniel and Tanya prefer to approach their music with the view that “we think that we can always do better. We’ll be a better band in the future.”

Their decided “un-scenester” status has not made them indifferent to an audience’s or a fan’s response to their music. It is quite the opposite. “Positive feedback has always meant a lot to us,” says Daniel. “Even if it’s just from one person.” In a recent interview, Daniel emphasized this point, citing shows where they played to only a handful of people. Sometimes these shows can be, for Daniel and Tanya, the most rewarding. Though far from an ideal situation, shows such as these leave little room for anything other than a true sense of intimacy between performer and fan. To be sure, Daniel and Tanya are receptive to and interested in their fans. Many of the folks who travel to see them play live are also members of various bands in and around Boston. Perhaps then it is in fellow players, other musicians who are also serious, intense, and driven, that The Medea Connection finds its most devoted fans.

Whatever the components of their fan base, Daniel and Tanya have relished the opportunity to meet such musicians. “It’s very enjoyable to meet like-minded bands,” said Tanya in a recent interview. “We meet a lot of people along the way…who are in a similar position to us. They aren’t ‘connected’ either; and they’re all in different genres,” she continued. Perhaps it is this appreciation for various genres of music—metal, or hard rock, or punk—that is at once the appeal of The Medea Connection’s music, as well as its greatest hurdle among fans. That is to say, in an age where rock music is more classifiable and compartmentalized than ever before, The Medea Connection continues to defy classification. They just keep playing, and playing, and playing…