On temporary loan to Smith College and exhibited on its lower campus from May through October, five sculptures made up Bronze, Steel and Stone: Selections from the Nasher Collection. The pieces were lent by Raymond D. Nasher in memory of his late wife, Patsy Rabinowitz Nasher, who graduated from Smith in 1949. And like much outdoor sculpture, these pieces—on exhibit while the college art gallery underwent extensive renovation—by virtue of their extraordinary existence, presented passersby an occasion for cognitive confusion that, given time, would be transformed into profound reflection. 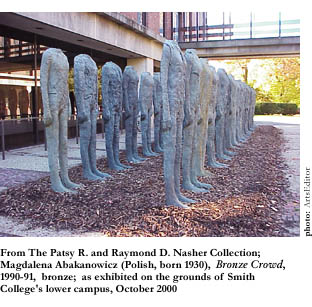 Coming from the back-most street of the lower campus, on the ridge above Paradise Pond and the shallow brook that feeds it, the unsuspecting pedestrian passing between two buildings on the quad would have encountered Bronze Crowd first, and might have been startled by the two orderly rows of tall, headless figures standing at spooky attention in front of McConnell Hall. The work of 70ish Polish-born artist Magdalena Abakanowicz, the obedient and sexless bronzes seemed to be awaiting the inspection of some commanding officer who wanted to make sure they hadn’t gotten out of line, and who didn’t wonder why they’d left their heads back at the barracks in the gulag. But heads, one learned upon walking behind the figures, weren’t all they were missing, for their bodies were the shells of their former selves, like halves of huge, human-shaped legume pods or very large Jello molds. And their feet, seen up close, their godawful ugly bare feet with long and creepy toes, compounded by the burlap texture of their variously gray-toned skin, communicated a treacle queasiness. These bronze figures looked ominously helpless and pitiably monstrous, and they made a loud and clear and provocatively ambiguous protest statement about (1) the alienating effect of the herd instinct, (2) the dehumanizing effect of totalitarianism, militarism, or seemingly benign commercial conformity, (3) the sinister, elusive, Godot-like identity of the social forces, economic conditions, or brutish and inhumane control freaks who’d stranded them there all summer, or (4) all of the above. Bronze Crowd had European existentialism written all over it, calling to mind Ionesco’s play about everybody in town except for the protagonist Beranger suddenly deciding to go ahead and join the crowd and turn into rhinoceroses after all. It made one cherish liberty, freedom of expression, and the ability to walk around aimlessly. 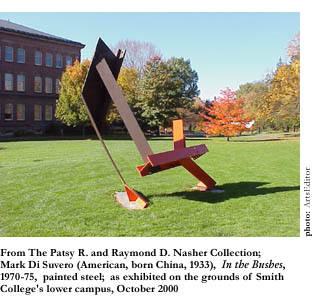 One was free to walk aimlessly into the middle of the quad, for example, for a good look at In the Bushes, a plaintive but humorous piece of constructivist sculpture by Mark Di Suvero, consisting of irregular lengths of steel beamery welded together to resemble, especially from a distance, a large game bird in the act of falling, after being shot, perhaps. Its mutely squawking face, discernible in the rusty, unpainted wedge of steel angling off the end of the long, iron-girder neck, had a bunch of eye-like rivets and a protruding edge that called to mind a broken beak. The huge, hurt bird was all-alone in the middle of that placid quad, too shy about its station in life to actually make any noise, spreading its three bright-orange tailfeathers in pain. It looked like an archetypal shape accidentally released from the rigidly aligned and evenly welded sections of a bridge in an earthquake—an animal spirit that had been embodied, or embalmed, in the nature-suffocating process of industrialization. A bird as stricken as the firebombed beasts in Guernica. 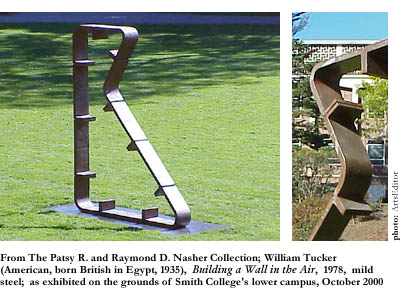 One would be hard-pressed to find such disturbing resonance in William Tucker’s Building a Wall in the Air, a simple, self-sufficient piece inconspicuously projecting a calm presence over there in the corner of the quad, diagonally opposite Bronze Crowd, by the massive redwood tree someone must have planted in the early Nineteenth Century. Was it an enormous model of some obscure metal gizmo found under the cushion of an easy chair or couch? Maybe a part from some appliance that only the assembly-line worker and repairperson have names for? Some kind of Legos permutation constructed by a child with more mechanical aptitude than her parents? Its ten neat segments of “mild steel,” like widened lower-cases of the letter “u”, formed a harmless if puzzling figure in the air, at first perplexing a mind that had feasted on the accessible, socially significant associations of Bronze Crowd and In the Bushes, but eventually creating for that mind a sort of quiet vortex to surrender to for a moment. When the search for meaning ended, the piece remained, happy with its serene and playful place in life, an uncomplicated but admirable engineering feat of grace and precision.

But what could be more unassuming, and at the same time more bold and outspoken, than Richard Long’s Slate Line, a linear arrangement of five rough slate slabs of varying lengths stretching for approximately 15 or 20 feet in the grass in the corner of the quad closest to the herb garden and greenhouse? It took some looking to find this piece—it couldn’t be seen from anywhere else in the quad, really—and when one did find it, one had to check the temptation to roll the eyes, ask if this was some kind of joke, and say (in that American way), “My three year-old could have done that!” Here it was, a line of gray flagstones in the lush green grass, suitable as a walkway connecting the back door to the toolshed or driveway back home. It was art, all right, at least in the sense that art comes from artifice—the natural materials had been manipulated by human hands, you see—but it wasn’t very “artificial.” In fact, it was refreshingly natural: just a few ocks taken from a quarry, or lifted like shelves from a cliff or an outcropping, then put in an order that was anything but random, making a statement of the simplest sort. A nature-lover’s statement about the most basic human relations to the environment. One started to see that it was no joke at all, this piece, and that one’s three year-old would have had a nice time jumping from slab to slab. In fact, Slate Line was dead serious, yet liberating too, freeing the mind from the labyrinth of social complexities and inviting a very short walk from one end to the other. Inspiring some very masculine considerations of a sagacious nature, its grave reverence for the hard facts of life reminded the jaded downlooker, or the bemused sitter-uponer, that slate used to be used for gravestones.

Such oblique and humble handsomeness—such brawny dignity—found a feminine counterpart of sorts across the way, near a bench and a group of young tulip poplars. Not far from Bronze Crowd, but far enough to be safe from its spell, Venezia Blu, by Beverly Pepper, probably the most seasoned and widely exhibited artist in the show, made its pretty presence known. It consisted of four brilliant stainless steel and blue enamel boxes, open-ended and stacked at overlapping angles to create optical tricks of reflection and refraction, splitting the ordinary visual field into diverse, interconnected, euphorically dissonant pieces. Standing a few feet from the corner of the structure, one could see through the open cubes to the huge hurt bird, then at the warped reflection of the building or bench or bush to one’s right in the chrome side of a cube, at the smudged reflection of another part of the quad in the bold blue enamel lining of a cube, and so on to the next cube—so that one field of vision included a wide row of connected views at least half of which were reflections. 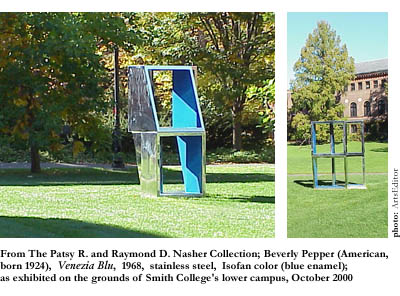 As its title indicates, Venezia Blu looked like it was made to stand beside the sloppy brown Adriatic waters of Venice, between some dogie’s palace and a quaint tratorria maybe, a sleek and chic yet dignified shrine to the blue skies and silver seas they used to have there when Italy was in its prime. The shiny sculpture seemed to have been fashioned from the chrome bumpers and waxed blue fenders of some ’66 Chevy convertible. It wanted to be leaned against and crawled through and climbed on by small children and sat inside of by playful adults, and then appreciated all the more for the echo chamber one’s voice had the honor of discovering inside. A minimalist pop-art shrine, refreshingly free (like Slate Line) of intellectual and emotional complication. A cool, austere, and unyielding optical treat.