When Mark Morris touches something, it is forever altered in our perception. His dances belong to a world that is so like our own, and yet so different, in tune with the universe while making ripples through it.

Since founding the Mark Morris Dance Group in 1980, the Seattle-born choreographer has created over 110 dances, containing all the intervals between somberness and humor, often within a single piece. Morris’ choreography can be almost painfully simple, nearly trite, and then incredibly complex, building upon a theme like a baroque symphony that swells to the ranks of a heavenly choir.

His choreography isn’t lofty and unrecognizable, though. There is something accessible about how he strings together steps and phrases to create the ever-evolving visual impressions we call dances. Even while wondering how the dancers could possibly move certain ways, the audience instinctively understands what is presented on the stage. As the curtain descends, one is left with the hunch that he or she has seen this before, perhaps in a dream. 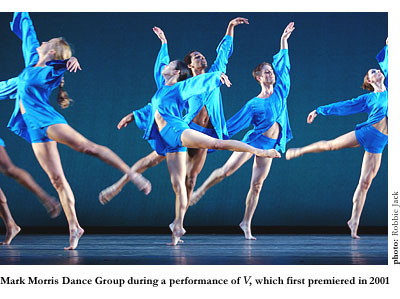 Mark Morris has embraced the challenge of balancing the old and new, effectively taking all the old formulas and mixing them up. Drawing on an eclectic background of Balkan folk dances, Flamenco, ballet, and American modern dance, Morris imbues his works with a multifaceted spirit that is full of contradictions—it is Romantic, witty, classical, and innovative. It mingles the sacred with the profane to create something entirely different that is nonetheless familiar.

A diverse group of dancers in terms of age, race, and body type, the Mark Morris Dance Group has its own harmony, complemented by Morris’ choreography in which the work—the dance—is held above any individual dancer. There are no real stars.

The dancers’ accuracy gives the impression that every gesture is meant with conviction. Equally important to the steps themselves is what they demand, whether lyricism, drama, or staccato briskness. This deep awareness, so that each finger is accounted for, creates the illusion that even fingernails and eyelashes are part of the dance, a responsibility that rests on the performers more than the choreographer.

The letter V is more than just the twenty-second letter of the English alphabet—it outlines the metaphorical arrow tip which all of Morris’ works employ to cut deeply into the human heart. V is also the name of his recent work, which premiered in London last October. The Boston Premiere of V, presented by FleetBoston Celebrity Series, took place at the Shubert Theatre of the Wang Center for the Performing Arts, March 14 – 17, 2002.

Like so many of Morris’ creations, V captivates the observer, exposing the humanity of the choreographer, the dancers, and the audience, simultaneously raw and refined—a reminder that vulnerability coexists with victory.

V is set to piano and string music by Robert Schumann, a German Romantic composer (Quintet in E Flat for Piano and Strings, op. 44). It is an ensemble work for fourteen dancers, who move in and out of the theatrically powerful V formation, staging that takes advantage of the strength of the diagonal on the stage.

Framing the piece with clear-cut geometry, the dance opens and closes with the V formation. The seven dancers of the piece’s opening are simply standing and facing the audience, but the energy behind the dancers’ performance proves that they are more than mere pawns in Morris’ choreographic experiments.

The conclusion of the piece uses the same spatial arrangements, a V composed of seven pairs of dancers, this time embracing. The end remembers the beginning, and it is almost as if the audience has traveled full-circle with the dancers (and the dance itself) in a journey through Mark Morris’ imagination. It is, however, not just a cyclical returning to the source, because it is not quite a replica of what happened before. Besides adding a new twist to the beginning, the embrace at the end of V emphasizes the humanity of the whole experience. Perhaps more than anything else, the simple beauty of an embrace is something everyone can understand. 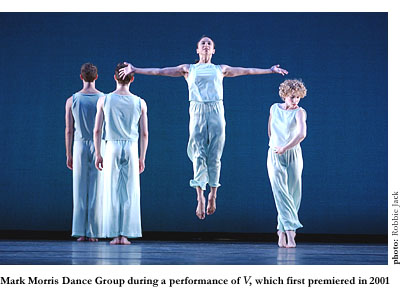 With near-military accuracy, the formations are pleasing visually, accenting the interplay of the two types of costumes, designed by Martin Pakledinaz. Seven of the dancers wear royal blue tunics and shorts, while the other seven are dressed in light blue tank tops and flowing pants. The simplicity of the costumes adds to the clean abstraction of the piece, while the ever-changing relationship of light and dark brings waves to mind.

At one point, Morris creates two images with two groups of dancers divided by costume color. The group in dark blue forms a V on one side of the stage, while the group in light blue forms an inverted V on the other side. The dancers then move along various diagonal pathways, mingling the groups and creating different visual patterns. The individuality of the dancers is overshadowed by their role in these shifting spatial arrangements, and one begins to wonder if some master plan has created symmetry and order to the most perfect extreme, manipulating the dancers like brainless puppets.

This sensation is only momentary, though. The dancing that follows is more emotional and less stiff, every movement alive and full of breath so that the previous spatial manipulations seem satirically hollow.

After the stage has cleared, a trio composed of a woman and two men moves along a diagonal path that recalls the angles of the original V orientation. With a man on either side, holding her outstretched arms, she brushes her leg forward, lunges, and then falls to the ground, as if pushing through something.

Later, a different trio, this time two women and one man, performs similar movements, in what one might expect would be a simple repetition of the motif. Some elements have been inverted and others altered so that what was high is now low and what was wide is now narrow. It is a microcosmic view of Mark Morris’ choreographic habit of taking what is traditional and reworking it with new insight and vibrancy.

It is especially interesting when the two trios reappear together, as if one is the reflection of the other through a bizarre mirror that inverts everything.

The partnering gets even more intricate as the piece progresses, although it is not gender-specific as in classical ballet. Partners change roles in an instant, the dancers’ arching backs and open throats an image of vulnerability or sacrifice. On balance and then off again, the dancers seem suspended and unaffected by the rules of physics, especially gravity. Yet Morris’ choreography is for people, not super-human machines, and there is ever-so-slight variation as the abstract shapes conform to the individual dancers’ bodies.

The dance as a whole seems more than moving pictures. Like Schumann’s music and like the complicated steps he employs, Morris’ choreography in V has the same layered quality as his other works.

Somewhere between sky and water, the effect of the dance is of an M.C. Escher composition, where the spaces between shapes become creatures with their own dimension and merit—a transformation between extremes that leaves one asking how it happened. All along, the tugging realization at the back of one’s mind is that it could not have occurred any other way. 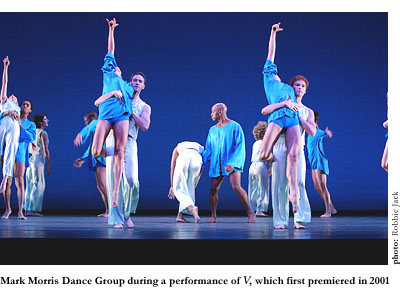 One such metamorphosis is a weighted, animalistic crawl that quickly becomes a light (and yet regal) walk. The unwavering focus of the dancers while in this reptilian crawl gives the movement a foreboding, sinister quality. Paired with heavy piano chords of a funerary intensity, the primitive, downtrodden lunging is deliberately earth-bound.

Throughout V, two groups of dancers pass through each other while crossing the stage, their pathways like the clasping fingers of an enormous beast (or brooding overseer). Upon meeting, the dancers transform, metamorphosing so that the horizontal becomes the vertical and vice versa.

When the dancers stand up and complete the journey across the stage, their lifted, stately walking gives the impression of height that seems to extend beyond the ceiling. With steps that are just as measured and precise as any other movement, simple walking becomes so dignified that one forgets it’s not just a dance step.

The transformation between contrasting movements stirs up memories of biology book drawings of the theory of evolution—the advent of modern man from a stooped-over ape ancestor, rising greatness out of the primordial muck.

But the metamorphosis also happens in reverse, suggesting that nothing is definite and time is not a one-way line. There is a horrifying sense of vulnerability when one realizes that nothing is fixed, not even in the theater; but there’s an incredible sense of freedom as well. While watching the performers, one is drawn into Mark Morris’ universe, a world in which evolution can rewind while the music goes forward. With the momentary, ephemeral nature of dance, anything is possible, especially when Mark Morris recognizes it.

There are other elements used within V, as Schumann’s music ranges in both tempo and volume. Various groupings of dancers and arrangements keep the ever-changing work interesting. The dancers’ technical prowess should not be underestimated, because their bodies are the true bearers of Morris’ choreographic ideas.

From the childlike spring of buoyant jumps, to the razor-sharp line of an arabesque extension, to the building intensity of turning leaps, V is full of extremes. There is even room for humor, as when all the dancers line up in what looks like gentle mockery of Riverdance.

V is not a grab bag of incoherent fragments. The unity of the piece comes from themes, like the V formation or the prehistoric crawling, that are repeated enough to brand one’s memory with a searing after-image, but each time slightly different. The wonder of the piece arises from Morris’ beautiful choreography and the fact that the audience shares the same frame as the human bodies on stage. The final embrace, like the rest of the piece, is so satisfying that the stunned audience wonders why there is not more.

V is the first dance created at the Mark Morris Dance Center in Brooklyn, New York, down the street from the Brooklyn Academy of Music where it enjoyed its New York Premiere in February. With over 31,000 square feet of rehearsal, storage, and office space, Mark Morris Dance Group’s five-story headquarters is the largest studio in New York City (60 feet by 60 feet).

But as V shows, there are no boundaries to Mark Morris’ imagination.