Warm, gracious, and grounded, with just a sparkle of pub-honed mischief, Irish accordionist Sharon Shannon is as genuine as she is genuinely talented.

While it’s easy to see her fresh-faced stage appeal, Shannon’s choice of instrument may seem a little unexpected. Distracted American reporters have sometimes misrepresented her as a fiddler or singer—after all, the twenty-one button accordion traditionally belongs in the tough but nimble hands of little old Irishmen in tweed.

The error upsets Shannon and has turned her shy with reporters in this country, although to be fair she does play the fiddle—very well. But she has played the accordion all her life—from the time she, her brother, and her sisters formed a band on a lark in their native County Clare. As part of the fun, each of the four siblings chose a different instrument. They performed for family and local entertainment, and often played to accompany their set-dancing parents. “My brother played flute, and my sisters played fiddle and banjo,” she says. “I thought the accordion might be fun.” 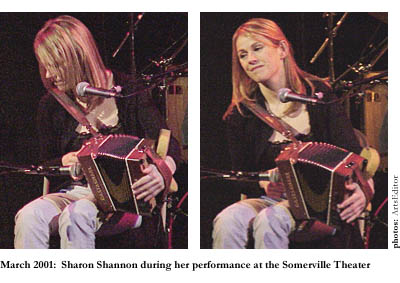 At 32, Shannon performs with the same unjaded joy she felt as a child. For her, the accordion is simply an extension of self—an instrument of tradition and experiment, emotion and virtuosity. She is beloved in Ireland as much for her spirit as her unquestionable artistry. This year she was voted both Folk Artist of the Year and Top Traditional Female Artist, though she would be the first to admit that traditional music is as much about collaboration of energies as individual success.

Shannon is currently touring the U.S. with her newest band, the Woodchoppers. Performances feature “absolutely loads” of instruments, including fiddles, harp, pipes, flutes, tin whistle, mandolin, guitar, bass, banjo, and of course, accordion. A recent performance at the Somerville Theater saw Shannon on accordian and fiddle, sister Mary Shannon on mandolin and banjo, Liz and Yvonne Kane on fiddle, Jim Murray on guitar, Ronnie O’Flynn on bass, and Lloyd Byrne on the drums. Opening the show was fellow Irish musician Karan Casey. 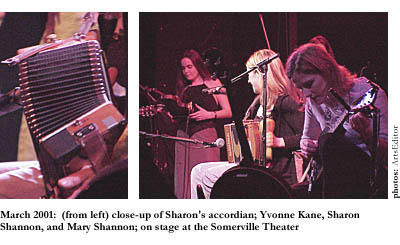 “When I was 19, I was playing pubs in Galway, mostly with a band called Arcady,” Shannon recalls. “I had had a lot of different offers to do albums, but I was nervous about playing in a studio. John Dunford, the soundman for the Waterboys, decided to try a live album in a pub. He arranged to have musicians join me on stage, including the Waterboys, who were working in Galway at the time on their album Fisherman’s Blues.”

“Three weeks after meeting them, I joined the Waterboys on stage at the Glastonbury Festival—the biggest rock festival in Ireland. It was a huge cultural shock!” she says. She put her album on hold and remained with the Waterboys for their final year together, before frontman Mike Scott chose to break up the band and “the whole thing kind of fell apart.”

Shannon returned to Galway and the album, this time with Dunford as manager. “He’s been my manager ever since,” she says. Sharon Shannon debuted in 1991, and featured an impressive list of guests, including U2’s Adam Clayton, the Hothouse Flowers, and Donal Lunny.

The album sold over 50,000 copies in Ireland, but it was her second project that year, A Woman’s Heart, with Maura O’Connell, Frances and Mary Black, Dolores Keane and Eleanor McEvoy, that struck Irish gold. It was a major hit and established Shannon as one of her country’s finest female musicians. In 1992 an entire evening of her music was featured on The Late Late Show, Ireland’s most popular television program. 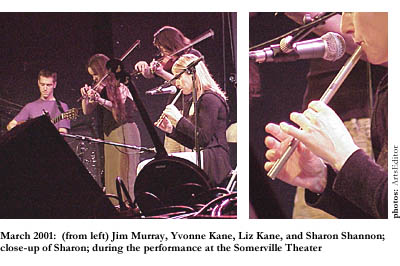 Shannon’s talent lies in her ability to stay true to traditional folk melodies while pushing the boundaries of the genre. Her third album, Out the Gap, was produced by reggae guru Dennis Bovell. Her fourth and newest album, The Diamond Mountain Sessions, again demonstrates the broad capabilities of her instrument. The first track “A Costa de Galicia,” for example, features guest Galician pipist Carlos Nunez, and, despite its Irish undertones, the accordion work has a distinctly fandango feel.

“I like to experiment,” she says. “I think it’s important to keep everything fresh, and to keep learning new things. But it’s also important not to mess with the basic thing, the melody of a tune. Deep-rooted, traditional Irish music is the base of everything that I do.”

Shannon’s recording sessions are more like informal week-long parties with any number of musicians “dropping in” to accompany or sing. For The Diamond Mountain Sessions, she organized a mobile studio and took over the Old Monastery Hostel in Letterfrack. To get to the hostel, musicians had to hike Diamond Mountain, hence the title.

For each studio track she lays down, she says, the “bit of magic” is usually captured in only one or two takes, reaching the height of folk artistry without compromising the beauty and feel of live music. 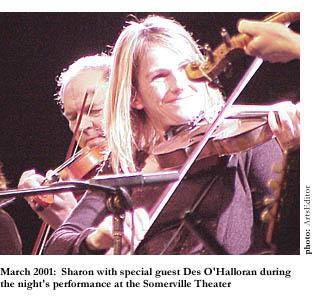 Shannon’s current tour of the U.S. has been quite a success thus far. “American and Irish audiences are very similar,” says Shannon. “It all depends on the venue. The reaction will be totally different—if it’s a theatre, everyone will be quiet. If it’s an Irish pub, things can get a little loud.” As testament to her growing following here, she is currently featured on the PBS special The Kennedy Center Presents: The Irish Gala, along with longtime friend Steve Earle, John Prine, and Emmylou Harris.

And coincidentally, the Waterboys played a recent reunion gig at the Orpheum here in Boston, but Shannon wasn’t there; she was a neighborhood away playing her own sold-out show at the Somerville Theater.