When John Lee Hooker passed away in June 2001, he left behind a trail of musical exploration and accomplishment that stretches back to the days of his youth in the Mississippi Delta during the Great Depression. Throughout a music career that spanned over six decades, Hooker recorded numerous albums and collaborated with several highly respected musicians including B.B. King, Bonnie Raitt, Canned Heat, and Van Morrison. Hooker has been acclaimed as one of the most important blues musicians ever. But aside from the music, he also left behind a legacy of compassion.

John Lee Hooker spoke with his grandson, Glen Thomas, about his wishes to create a charitable organization that would benefit at-risk children in the areas of literacy, education, and the arts. Before his wishes could be realized, however, Hooker passed away, leaving the future of his estate and his unfinished plans for the foundation in the care of his family, who decided to use Hooker’s estate to benefit various non-profit organizations. In August 2001, John Lee Hooker’s daughter, Zakiya Hooker, and Thomas began the arduous task of creating the John Lee Hooker Foundation.

Thomas contacted the Grateful Dead’s Rex Foundation and Carlos Santana’s Milagro Foundation for guidance. These highly respected and successful foundations served as models for the structure and operation of the John Lee Hooker Foundation. According to Thomas, “Coming up with a focus for the foundation and deciding where to begin” were the most difficult parts of the process. Ultimately, the family resolved these and other issues by simply asking themselves, “What would John Lee Hooker do?”

The Hooker family agreed that education should be their primary focus. Glen Thomas says that he and his family want to “help at-risk youth achieve the zenith of their abilities.” As the John Lee Hooker Foundation Web site states, “Its purpose is to support the well being of children and youth through educational programs.” The focus is directly inspired by Hooker, who, lacking decent educational opportunities in his own childhood, appreciated the importance of improved educational resources for at-risk and disadvantaged children.

John Lee Hooker had a quiet history of charity, playing benefits and giving donations to various grassroots organizations in Oakland, California and the surrounding Bay Area. He insisted that he receive no publicity or fanfare for his humanitarian efforts. According to Thomas, Hooker “couldn’t say no” to requests from charities to make appearances at fundraisers or to donate funds. His contributions benefited a wide range of philanthropies including homeless shelters and services, inner-city youth organizations, and health and medical services. Most importantly, Hooker wished to provide educational and cultural growth opportunities to disadvantaged youth.

Since its establishment in Oakland in 2001, the John Lee Hooker Foundation has striven to make Hooker’s wish come true. The foundation’s first major step was taken last August with a benefit concert celebrating Hooker’s birthday. The John Lee Hooker Birthday Charity Concert featured Big Head Todd and the Monsters and Canned Heat, among others. The goal of the concert was to raise funds and awareness, but according to Thomas, only one of those goals was really achieved. “We had a good turnout,” he says, “but because of flying everybody in, putting on the show, we actually ended up in the red.” The awareness, on the other hand, has led to several positive developments. “Afterwards, people knew we existed,” says Thomas, “and from there we had people approach us about our cause.” 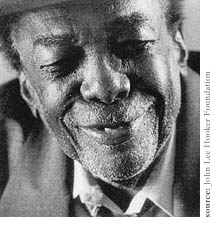 The benefit concert succeeded in generating interest among other charitable organizations. Due to the current economic gloom, organizations with similar goals have teamed up in various ways to maintain or make progress on certain programs. In staging this year’s Second Annual John Lee Hooker Birthday Charity Concert, Thomas says he is looking forward to teaming up with the Rex Foundation. Considering its notoriety, this collaboration should prove quite beneficial for the fledgling John Lee Hooker Foundation as it attempts to bolster awareness and funding. Due to ongoing discussions, the names of musicians and bands that will be playing at the concert will not be released for another few weeks.

The John Lee Hooker Foundation is counting on generating more public funding with a successful benefit concert and the expansion of its operations and programs. Until recently, the foundation’s efforts have been focused on “getting the whole infrastructure going,” Thomas says. “We had to make sure we got all our I’s dotted and T’s crossed with the federal government.” Now, the foundation is ready for action and will introduce its first program, “Blues in the Schools,” in October of this year.

“Blues in the Schools” aims to educate elementary school children about blues music. In this program the John Lee Hooker Foundation is working in partnership with Little Kids Rock, an organization that provides free music education and instruments to disadvantaged youth in public schools. Thomas explains, “The way it works is the kids will get their own personal guitar with a carrying case and a CD so they can practice at home. And we’re looking to meet twice in a week—one day will be music appreciation, learning about the blues and other music and how they influenced the music that they listen to today; the second part will be actual music instruction.” The concept here is not only to educate children about blues music, but to help preserve the blues tradition for future generations. “Blues is an art form,” Thomas emphasizes, “that was created by poor black people in the early part of the last century, and now, disadvantaged young black kids don’t even know about the blues—the music their ancestors started. They have no clue about it. And the best group to educate about this art form is the young kids—still in elementary school.”

John Lee Hooker lived his childhood in the same destitution that gripped most sharecropper families in the Mississippi Delta. Instead of spending their days in school, most children of that time and place toiled on their families’ farms. Hooker’s young life in a poor, rural community not only inspired his music, but it inspired his philanthropy as well. Today, the John Lee Hooker Foundation endeavors to carry on his philanthropy through education. “My grandfather believed that music heals,” says Thomas, “and our focus will always be helping under-privileged and under-represented youth of America through music.”