The opening tone on the latest double-CD release by ambient drone craftsmen Stars of the Lid vaguely calls to mind the warm-up tuning note of an orchestra. When the conductor gives the signal, a series of stringed instruments fade in, followed by the progressive layering of more instruments, until a rich sound covering a wide dynamic range is heard, blended together by heavy reverberation in an empty concert hall. Once the sound reaches its apex, it begins to gently recede, returning at last to near silence. From this first full-bodied tone, The Tired Sounds of Stars of the Lid continues on a comfortable journey, carrying the submissive listener over the crests of many satisfying waves of sound—waves often languid, sometimes a touch tumultuous, and at other times practically nonexistent. And although highly repetitive, each wave is subtly distinct from all of the others, thanks in part to the large palette of traditional instruments and found sounds utilized, all transmitting their signals in an atmosphere of soft slumber. 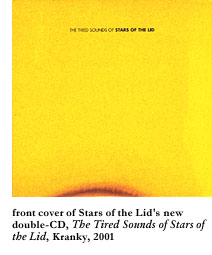 To those unfamiliar with the typical characteristics of “ambient” music, this material may sound odd at first. Ambient music largely aims to bathe the listener in an environment of sound rather than lead him or her along a linear path. It is often very quiet music, and can be experienced in at least two ways, both equally satisfying. First, when played barely above a perceptible level, the sounds of the listener’s environment interact with the music, allowing it to be practically ignored, and ultimately having a subconscious effect on the mind. However, the music can also be attentively focused upon, an activity that quickly reveals complexity and beauty that is not apparent from a distance. Ambient music need not have any outward signs of the familiar climax/release format found in much music, and it is not even necessary that it follow conventional notions of melody and rhythm. The totality of the experience matters most.

Stars of the Lid find their spot in this quiet corner of sonic appreciation quite comfortably. An Austin, Texas-based band whose core consists of the duo of Adam Wiltzie and Brian McBride, they first released 1994’s Music for Nitrous Oxide, an adept exercise in minimalist home recording. From that point, the band released several more full-length works over the next few years, eventually signing to the Kranky label. In 1998, they released Per Aspera Ad Astra, a collaboration with line painter Jon McCafferty, who not only created the CD’s cover art, but also found his way into the music via recorded bits of the artist painting in his studio. It’s worth noting that McCafferty’s name also appears in the “contributors” list of this most recent CD release.

On The Tired Sounds of Stars of the Lid, we find the band assimilating more overt melodies and song structures than on their previous releases, most of which deftly explored continuous, unbroken beds of sound. Here, most of the tracks are arranged in two- and three-part suites, each employing a modest number of chords (usually no more than four) that iterate for upwards of six or seven minutes before shifting into similar yet distinct territory. There are no vocals in this music; nor is there noticeable percussion. But that does not mean there is no rhythm. The repeated waves of sound form a backbone that keeps the tracks fully grounded.

During the first two-part suite, “Requiem for Dying Mothers,” stringed instruments fluctuate among several chords that exude a distinctly sad feeling. After six and a half minutes, a deep, window-rattling bass note joins the slow pattern, commencing the second section of the suite. This second part is sparser sonically. It continues to feature the bass prominently along with what sound like tape loops of chords played in reverse. The suite ends with the sound of a whimpering dog dragging a piece of metal or glass on pavement. This concluding sound effect caps off the sorrowful feeling of “Requiem for Dying Mothers” quite eloquently, granting it an almost tear-jerking quality.

This austere atmosphere segues nicely into “Down 3,” a short piece heavily comprised of field recordings—including fuzzy, mostly unintelligible voice clips and a subway or bus stopping and starting. A lo-fi piano plinks away eerily in the background amidst analogue tape hiss, fading away halfway through the track only to suddenly reappear for a few more minutes of wandering.

“Broken Harbors,” the suite that completes the first CD of the set, drops the noise level to a lull, floating in a dreamy state for its entire length. The tall waves of tone, once the highlight of the music, now ease away to reveal a drifting world of twinkling guitar feedback, reversed tape loops, and continuous static, some of which sounds like an idling moped engine. Horns, strings, and bass all jump in and out of the mix at seemingly random intervals, like a symphony experienced through a half-asleep stupor. The overall volume on “Broken Harbors” is very low, so that if the music is playing in an environment with a substantial amount of background noise, it may appear to slip away entirely.

The second CD begins along the same lines as the first, bringing back emotive, rich, repetitive chords. “Mullholland” is the first of a series of stand-alone pieces, breaking from the suite format. Its hallmark is a tumbling, somewhat non-tuneful bass note that hovers over the string patterns. This transitions into “The Lonely People (Are Getting Lonelier),” which actually evokes a hopeful feeling, with chords now ordered in an upward direction.

One of the standout tracks on this disc is “Piano Aquieu,” which begins with a lone keyboard solo, soon replaced by several other slippery keyboards playing similar notes, but slightly off beat and pitch from one another, loosening up the feeling of the track. Then one of the keyboards begins rocking back and forth between two notes in the background, while the others slide among various melodies in the foreground. Finally, one keyboard starts playing a consistent, four-note lullaby while the others drive comparatively forceful notes through the hypnosis the first one is creating, panning from the left to right speaker and back again in their effort to break the incantation. These pianos, indeed, appear to be carrying on a conversation, each interrupting the others with its own preferred four- and five-note bars, all trying to dominate the discussion. Lest it get out of hand and crack the sleepy feeling of this music, though, the keyboards have been filtered through a thick syrup, effectively keeping a leash on their musings.

Returning to the suite format, “Ballad of Distances” presents us with a short exercise in the ability of reverberation to portray distance. One can only guess, but it appears that the order of the instruments from close-up to far away during the first part are: piano, strings, horns, and an odd sweeping sound, which shuffles around in a far-off corridor beyond the outermost boundary of the immense auditorium we appear to be in. This is one of the most definitive statements of the Stars of the Lid aesthetic—simple, familiar sounds treated in such a way that they are given monumental presence.

The grand finale of the experience is quite unlike the energy-packed climax one would expect of a traditional orchestral performance. It’s another three-part suite that takes the idea of floating listlessness to its most extreme. “A Lovesong (For Cubs)+” begins with waves of sound that are now clearly more drawn out than ever before, like a car racing down a straight desert highway—slowly escalating in volume, suddenly leaping to its peak, and then rapidly dissolving into the distance. These waves need their space, and when a trumpet (or car horn?) at last joins the pattern, we’re beyond the 4-minute mark.

Background noise in this suite takes the form of rough clatter, sounding like either wind chimes, a flock of seagulls, or mixed-up dining hall conversation. But who can tell? Heard through thick waves of soft instrumentation, it is a rather disconcerting sound, as if something important is happening that needs our attention. But alas, we are too deep in slumber to pay heed, so the emergency must be resolved without our help. The cacophony does eventually subside, but one won’t know whether it’s because the activity ceased, or because we have fallen even further under the spell of sleep. The suite ends with waves spaced so far apart and with tones so faint that turning the volume up to maximum hardly improves clarity.

But the strengths of The Tired Sounds of Stars of the Lid are actually quite clear. A complex piece of music despite its simple surface, it warrants repeated listens. The wide array of source material used adds a high level of density to the music, and the intricate subtleties found in each wave of sound, due largely to natural human imperfections in playing an instrument (and a bit of fiddling with effects), give the repetition an unpredictable edge. Equally suited for active listening with sharp ears or mellowing out at the end of a long day, this music finds its home somewhere between the sweet symphonies of Mozart and the addictive purr of the microwave oven. In the end, Stars of the Lid allow us to relieve our state of tiredness as we slip into restful bliss. The journey they have chauffeured us along has given us much food for thought. But we are tired, and now it is time to sleep.