It was a beautiful, thoroughly American Saturday in mid-July and they were halfway to Vermont, headed west on the scenic, serpentine, and treacherously traffic-packed stretch of asphalt known, sentimentally, as the Mohawk Trail. It was past noon and they wouldn’t crack open Askold Melnyczuk’s beautiful and only somewhat American novel, Ambassador of the Dead, or start to read it aloud until they had passed the paper mill in Irving, on the north bank of the toxic Miller’s River in western Massachusetts. Intending to park at a trailhead near Dorset, backpack up to Griffith’s Lake, and pitch a tent for the night at a maintained campsite on the Long Trail, they’d agreed that she’d do the driving on the way up from Cambridge and let him do the reading aloud. 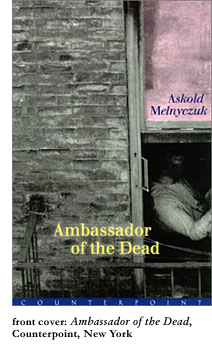 Ever since Ambassador of the Dead had come out in the spring, they’d been looking forward to the chance to read it aloud, as they hadn’t been able to do a few years prior when Melnyczuk’s excellent first novel, What Is Told, was published. They knew it was going to be good. A scrupulous and tasteful agent friend of theirs had sold it to the publisher (Counterpoint), just as she had sold Ha Jin’s Pulitzer Prize-winning novel Waiting and a number of other pieces of high-quality fiction in recent years. Also, the author—pronounced approximately Ahs-cold Mel-nuh-chuck—was a sorely missed dear old friend who’d attended their American hillside wedding in Maine 15 years earlier. They’d known him from their bookworming days in the Boston University’s English Department, where they had reason to believe he still taught and maybe also still edited Agni, the adventurous literary magazine he founded while a high school student in New Jersey. Yes, they had connections, and the book already had sentimental value.

So he read to her, as she drove out Route 2, the salty and socially intelligent prose of their fondly remembered old friend. And it was good, as the increasingly discredited Hemingway might have said, damn good right from the start. It was characteristically Melnyczuk, none too polite or sparing of sensual and idiosyncratic detail in its portraits of characters, patient and seemingly effortless in its development of them as symbols and symptoms of their cultural circumstances:

Ada Kruk was sitting in near darkness when I entered the living room. Everything around her, what I could see of it, appeared neat and in its place—magazines and books rose in dusty piles on the coffee and end tables.

Pithy and profound, agile and anguished, amused and even quietly amazed, the prose rose to the occasions of its own making, equally at ease with historical exposition (about chaos in the Ukraine between the Russian Revolution and the end of World War II) as with telling descriptions of people who eventually and without ceremony would assume emblematic significance. They could tell from the opening pages that the book would have Melnyczuk’s true-to-ear dialogue, overheard speech rendered in specific dialects—English broken, fractured, or just kind of bruised. What they didn’t suspect was that it would have the kind of circuitous plot that allows a novelist to subordinate all manner of detail to a single, pointed theme—the need for history-haunted humans, in this case immigrant Ukrainians and their first-generation American children, to “move beyond the veil of inherited images” that keeps them from taking peaceful pleasure in the complicated color and form of the world, which itself may be an American dream:

“You’ve gained weight,” she greeted me.
“Should I turn on the light?”
“Why? I know what you look like. We both know what’s in this room. It hasn’t changed much since you were here last.”

Even before he’d finished reading her the first chapter’s few pages, Askold Melnyczuk was their old friend again.

But by the time they’d crossed the Connecticut River and had headed north toward Brattleboro, Vermont, they knew that the short first chapter, like many in the history of the storytelling craft, was a tease, providing the beginning of a frame story that wouldn’t be concluded until the novel returned to it in the final pages. The story began at the end, that is, with the narrator, a young Boston doctor named Nick Blud, returning to the downtrodden neighborhood of his early childhood at the emergency summons of Ada Kruk, his childhood friend Alex’s solicitous, mysterious, and borderline psychotic mother. The scene covered maybe a half-hour in seven pages, but they saw that it was triggering in the narrator an association of memories that would lead him back as far as the young adulthoods of his parents. Nick was eager to tell the story of his life as a first-generation Ukrainian-American, moving with his quickly assimilated family at age 12 from the time-warped ethnic ghetto that the Kruks remained stuck in to a timeless and bland suburb; and while he was at it, he was also eager to tell the stories of his friends and parents and relatives, so that he could salvage something for them all, survivors and spirits alike.

It was easy for them to infer, as they crossed the Appalachian Trail on the high ridge in their car, that Nick, however mature and considerate he’d turn out to be, would not have returned on Ada’s summons had there not been something of value in it for him:

Ada. My window on the past. Without her, it would have remained a series of close-ups, a museum filled exclusively with portraits of one’s own family.

But they suspected that, being a good doctor and a care-giver to the end, he wouldn’t have been able to ignore the cry for help of an old friend’s mother, however much he’d wanted to, even if there hadn’t been anything in it for him. Answering the cry, it was clear, would inspire him to give all the displaced persons from his past, who are very cleverly mentioned in passing in the brief opening, a place to rest and find solace after their authorial creator had developed them to their fullest tragic extent.

Intoning from the passenger’s seat, he read a good ways into the ensuing 200 pages of wandering and wonderful flashback, which makes up most of Ambassador of the Dead, before they found the trailhead, parked, and started huffing up the mountain to Griffith Lake—far enough at least to learn that the narrator would be taking them back to the temporarily idyllic childhoods of both his parents’ generation and his own. And that there would be temporarily idyllic Black Sea summers in the Crimea for the parents, and temporarily idyllic Black Pond summers in the Catskills for the kids. (Black for oblivion; black for natural wonders experienced “out of time” and free of the class struggle, sexual strife, religious hysteria, and cultural decadence that would shape the adulthoods of both the immigrant Ukrainians and their first-generation American children; places beyond the James Joycean nightmare of history that the grown-up characters would for the most part be unable to awaken from.) But mostly the novel would offer them irresistibly bittersweet heartbreak of the redemptive and cathartic kind.

Unfortunately, it was dark in the car on the way home to Cambridge. They had to wait another month to get back to the book, this time on a 10-day car-camping trip up the Downeast Coast.

Now it was his turn to drive, her turn to read. Somewhere between the Hilltop Steak House and the Golden Banana strip joint on Route 1 in Peabody (or is it Saugus?), she (the one with the great memory) summarized the preceding pages and picked up where they’d left off, somewhere in the middle of the flashback. The next day, they’d met friends for supper at a Japanese place in Portland and were on their way to Acadia National Park by the time they came across the flashback within the flashback, the story within the story within the story as it were, that would fill them in on events from the preceding 40-some years most crucial to the formation of Ada Kruk. They’d walked the cliffs of Acadia National Park and biked the Rockefellers’ carriage roads and were tooting along in their rusty Honda toward the spruce-sappy and seal-happy inlets of Cobscook State Park, in the northeastern corner of the country, by the time they really knew that the book was also the author’s, not just the invented narrator’s, effort to make the past less “a minefield about which few maps seemed to agree” and to make it seem as if “the past, time itself, had suddenly found a body.”

They loved the fact that the book, setting characters against the background of sociopolitical events, managed to prove—as Kundera, Marquez, Joyce, Faulkner, Eliot, Morrison, Hardy, Tolstoy, and others have done—the not very American theory that historical events determine individual character.

They applauded his (the narrator’s, but also the novelist’s) success in making Ada Kruk a tremendously sympathetic tragic heroine, and maybe an unlikely one at that. She was the dignified but dispossessed daughter of a judge, a relatively obscure Ukrainian immigrant who lived through famine, German occupation, Soviet oppression, execution of her father, subsequent death of her mother, and a couple of years in a displaced persons camp. (Come to think of it, a catharsis just waiting to happen.) Ada was a wildly imaginative woman who, before she succumbed completely to her ghosts and began to lose her health and—symbolically enough—her sight, could have moved from the New Jersey ghetto to live in the peace and harmony she’d had as a child with Anton the poet, her biographer and would-be lover, the intellectual magician and celebrant of Whitman (that 19th Century poet of displaced persons); who, if it hadn’t been for her commitments back home with a troubled brother and a troubled son, could have had it all—could have had Anton the poet, the author of the short story titled “Ambassador of the Dead” within the novel of the same title. Ada—whose borderline-psychotic obsession with the past made her the most qualified candidate, of all the history-haunted humans in this marvelous novel, for ambassador of the dead.

Driving home from Vinalhaven Island the following Sunday, they would finish the frame story and the book that it concludes, and they themselves would conclude that Ambassador of the Dead is not just about the difficult problems of assimilation for a small group of immigrant Ukrainians and their first-generation American children, but also about the very real possibility of seeing the United States as less a melting pot, mosaic, or Whitman poem than a very large camp for displaced persons. They would love how the conflict between the New World and the Old Country comprises the large heart of the book, a struggle typified by the sons—Ada’s troubled son Alex saying at one point, “I hate the old world” (as if in counterpoint to Faulkner’s Quentin Compson saying, “I don’t hate the South”) and his enviably well-adjusted friend, narrator Nick, saying in response, in reference to the individualistic impulse of Americans generations removed from the traditions of their ancestors, “We’re such loners here.”

It wasn’t just a Rand-McNally/AAA road book, though. There was that night in Vermont, just before sleeping, when they had gotten in a couple of pages. They had pitched their tent by the lake in the Green Mountains, and he had read to her by headlamp in the tent, and they had felt glad to be here after all on this crazy North American continent.