How did vivacious Irish journalist-poet Gwen McNamara get it into her excited head, at the turn of the millennium, to found the nonprofit art salon Optimal Avenues, and did she really believe that a band of intellectuals and aesthetes in northern Europe can do much to “turn, all together,” as a United Nations mandate recommended in its official manifesto, “the culture of war and violence into a culture of peace and non-violence”? Messianic missionary or not, she must have believed that the formation of a collective Culture of Peace begins with creative individual efforts like the one her late countryman William Butler Yeats was making when he described his dream of retiring to the lake isle of Innisfree, in Ireland, where “peace comes dropping slow.” Had she been a negotiator instead of an art-loving wordsmith, she might have started a Catholic-Protestant coalition of some sort. 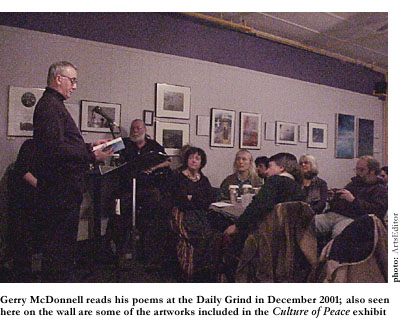 After laying the macadam of the Optimal Avenues, McNamara lined a distinguished group of accomplices along them, got in touch with a gang of artist-poets in very Irish Boston, and arranged an exchange of reciprocal visits. In May 2001, four Massachusetts poets traveled east across the Atlantic to Dublin to do a series of readings in libraries and pubs; and in early December 2001, McNamara and three cronies flew west across the big bog to do the same in Boston.

In addition to the readings at the Harvard Square Coop in Cambridge, Shea’s Pub in South Boston, and Patrick Pierce Gallery in Lowell, the Irish visitors participated in The Culture of Peace exhibit of poems and visual artworks that has been shown at the Boston Public Library, the Brockton SummerFest, the Imagine Studio in Amesbury, and the Daily Grind Coffeehouse in Bridgewater, and that now—through March—is showing at the Tsongas Gallery at Walden Pond in Concord.

Only one of the four scholarly Irish aesthetes—Veronica Heywood—contributes visual art to the traveling exhibit. The others—Gerry McDonnell, Mary Guckian, and McNamara herself—display framed copies of their poems on the wall, which leaves the contingent of a dozen or so Americans (poets who dabble in visual art or visual artists who dabble in poetry) to dominate the exhibit. It’s hard to say what kind of exchange rate the respectable and disciplined Irish poets and artists are getting here, especially given the sometimes tired or unfinished accomplishments of the North Americans.

Unfortunately, the three Irish poets—and their equally articulate painter friend Heywood—will not be on hand to recite their poems and discuss Irish history and mythology on request at the Tsongas Gallery. Nor will the framed poems by McDonnell, Guckian, and McNamara, and the two paintings by Heywood, speak for them as eloquently as they did for themselves during their group presentations in early December. 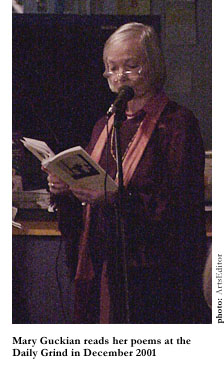 Reading Mary Guckian’s atmospheric lines about fireplaces, ash-heaps (“landfills” or “dumps” in the American vernacular), and rays of early sunshine melting frost from domestic windows, the gallery-goers won’t know how good it was to hear her, for example, in the modestly stately Southie pub (even though the barmaid’s boyfriend continued to play video golf toward the front of the room). They won’t know how, in a warm brogue, she celebrated the appearance of popular petroglyphs (i.e., graffiti) on the public walls of Ireland; sang out some free verses about the tide at Sligo “swallowing our masterpieces”; goaded the giddy new Irish national pastime of dining out in restaurants; praised the role the countryside plays in keeping the Irish in touch with the peat-scented earth; and spun a poetic pun on the time-warping double meaning (used in storing data and in reversing the direction of a moving vehicle) of the term “back up.” Pleasant, fresh, direct poems with brave statements, made with enough brevity to serve a sting.

If visitors to the Tsongas Gallery aren’t able to read Guckian’s poems aloud to themselves, at least they’ll be able to read (in a lilting accent, under the breath) Gwen McNamara’s fairyland poem, “The Voyage of Bran,” concerning the seduction of a legendary Celtic king by a very lovely “woman from unknown lands.” Concurrent glances back and forth at Veronica Heywood’s illustrative oil paintings, The Voyage of Bran I and II, will show how the “honeysuckle cascading/Over Brandon’s Pier/Perfumes its entrance.” The orange path of sunset reflection will draw the viewer across the rippled surface of the water to a sculpted range of hills on the shore in one painting, and the long orange tresses of the prê-Raphaelite lass who seduces Bran will fix the gaze that’s finished with the hills. 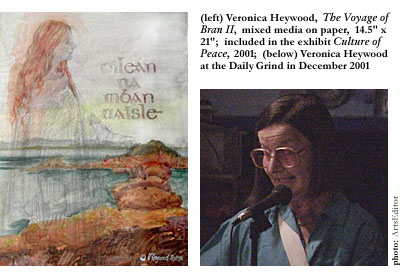 Heywood’s gleeful remarks on her paintings, at Shea’s Pub in December, conveyed a lucky European’s amazed delight at living among the ruins of ancient cultures—which North Americans can enjoy only if they live near pre-Columbian cliff dwellings, burial mounds, or shell heaps. Too bad she can’t be at the Tsongas to describe the 2,500 year-old compost pile that her dog dug up! Or the medieval epic that serves as a veritable map of Ireland, with “every hump and bump” described. (Place names in Ireland must represent Celtic myths the way place names in North America represent vanquished native peoples.) It was a pleasure at Shea’s to hear Heywood speak, too, of the white gannet (a seabird) that appears in one of her paintings—how it flew near her easel as if asking to be included.

Gerry McDonnell forgot to bring to Shea’s what he called his special “Jewish heritage in Dublin” poems—the ones that must make much of Leopold Bloom, from James Joyce’s modernist Irish epic Ulysses, who “ate with relish the inner organs of beasts and of fowl.” But he did bring his “psychological journey” poem—a truncated epic in its own right—about a gloomy man conscious of his division from joyous childhood. McDonnell read this long meditative poem, weighing well each cared-for line about “diving down past fish and mystics” into the somber waters of the Irish soul, with the grave serenity it deserved—but it’s not to be found on the walls of the Tsongas Gallery either. 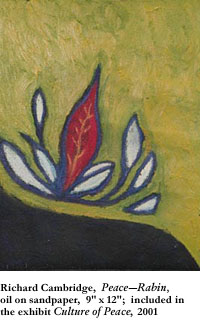 Not that there won’t be some good things besides Heywood’s paintings and McNamara’s poem to be seen and read on the walls of the Tsongas Gallery at Walden Pond. Some of it’s pretty good, and some of it even deals explicitly with the extremely unwieldy topic of “peace” (and not just with “culture”). There’s Richard Cambridge’s bold little painting Peace—Rabin, an elegy to the assassinated truce-tending Israeli leader, with its dark red Jewish candle on a bold gold background. (Better that than his nearby complementary poem, which begins, with flatfooted high-mindedness, “A peacemaker holds in the Self/the difference of the parties/being reconciled.”) There’s Valerie Lawson’s attractive if kind of crude arrangement of origami cranes (made in Japan to commemorate the American nukings that ended World War II) fluttering skyward—blue, red, black, and white, against a newsprint background. (Better, too, than her nearby poem, which begins with a characteristically corny if deeply considered line: “Imagine the whisper of all those wings/as they unfold their secrets and take flight.”) There’s Andy Levesque’s striking black and white photo, titled Armistice, of lilies (symbols of peace) silhouetted against a cloud-crowded sun. (Again, complemented by a poem of extraordinarily ordinary quality, beginning, “do you remember—in the tender warmth of early spring/how each of these mother ducks would lead a procession/of five or more fuzzy golden spheres—each one so cute/toddling one after another—still too young to swim?”) It would be safe to infer from these three examples that the visual art in The Culture of Peace exhibit is always better than the poetry. Michael Brown’s work, however, is an exception to this rule—his poetry is more skillful than his photography. 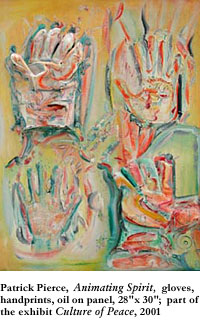 Some of the visual art and poetry by the other North American artist-poets is fine. (It’s a damn big pair of aesthetic shoes to fill, isn’t it? How many can paint and poetize with equal skill? Are Elizabeth Bishop, Lucas Samaras, Derek Walcott, Michelangelo, and Joni Mitchell the models for these shoes?) But only one of the artist-poets gives equal satisfaction with pictures and words. That would be Lainie Senechal.

Senechal’s modest poem-and-watercolor combo, “Sailing Past Grape Island” and Sailing Past Grape Island respectively, work well together, and both do justice to the topic. The poem is specific, rhythmic, and graceful, well timed and musical without being end-rhymed: “Slopes covered with meadow quilt,/woven with lacy doilies,/patched with yellow buttons;/ends of vines droop rosy tassels.” (Also, because it feels good to type such lines: “Song sparrow calls from sumac hedges/sandpipers push out the tides/on draughts that rise near cliffs/sturdy sea mews glide.”) The painting, though an ordinary watercolor waterscape, is colorful and unpretentious, integrating the imagery as a single entity unified by line and color—sailboat, hill, buoy, and cloud—the way the corresponding poem gives equal emphasis to individual images. (“When ice stiffens surf of harbor,” she concludes, “the North wind will sing in stays of mast/to awaken memory of that summer day/spent sailing past Grape Island.”) And her well-sustained verbal mediation on “Commuting with Vivaldi,” nearby on the wall, also works as a thorough, resourceful, and honest poem. Nothing flat, clumsy, pompous, or unintentionally humorous about it.

One can’t help but wish that the three Irish poets and the one Irish painter had videotaped their Shea’s Pub presentation for looping on the wall of the Tsongas Gallery. It would have made Gwen McNamara’s well-intentioned participation in the United Nations’ Culture of Peace project less overwhelmed by the North Americans, who appear to have joined the cultural exchange in order to draw attention to themselves instead of to create a collective peace. Their distinguished Irish guests—good-humored, learned, and gray about the temples—should have been given somewhere more comfortable to sit.