George Harrison, who died one year ago this month, has always been considered to be something of a mystery. Perhaps this is because people are all-too-quick to view him as a man who lived his life in stages: pre-Beatles, Beatles, solo career, retirement. This distressingly common attempt to simplify a life through categorization makes Harrison seem an odd duck indeed; how can the young man who gleefully romped through A Hard Day’s Night be reconciled with the older man who was prone to bitter anti-Beatle statements?

In Behind Sad Eyes: The Life of George Harrison, Marc Shapiro’s attempt at understanding the man behind the legend, Shapiro eschews oversimplified, counterproductive categorizations in favor of a much more effective tactic: presenting Harrison’s life as a single, flowing narrative, governed by a cause-and-effect logic. 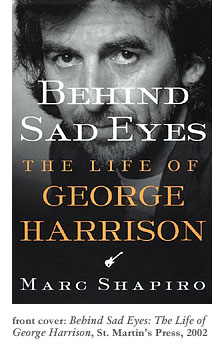 Reading Behind Sad Eyes is like watching one of your favorite movies. There’s drama, comedy, music, and a protagonist blessed with talent but cursed with tragic flaws. Indeed, Shapiro reveals that Harrison’s insecurities and personality quirks often threatened both his career and his personal relationships. (Perhaps the most interesting example would be his impatience with his own fans; he was not above throwing on-stage tantrums when an audience’s reaction failed to suit him.) For further dramatic tension, there’s the long-running conflict between Harrison and James Paul McCartney. Anyone who has seen the documentary Let It Be knows that Harrison bristled at McCartney’s self-appointed leadership of the Beatles, but I never knew until reading Behind Sad Eyes that the tension began even before the Beatles were famous and lasted until Harrison’s final battles with cancer.

For romantic farce, there’s the love triangle between Eric Clapton, best friend George Harrison, and Harrison’s wife Pattie. Despite the tragedy of broken hearts, the Clapton/Harrison/Harrison dynamic becomes so absurd that it gets outright laughable even before Harrison manages to complicate matters further by getting Ringo and his wife involved as well. Before Harrison eventually finds happiness with Olivia, his romantic life reads like a play by Christopher Durang. But if the twists of his life are sometimes tragicomic, author Marc Shapiro never comes across as someone who has set out to ridicule his subject. If anything, the complexities of Harrison’s life make him seem more human. And this seems to be Shapiro’s ultimate goal—to emphasize that despite all of the fame, talent, and wealth, George Harrison never claimed or wanted to be anything other than an average guy.

For music, there is of course Harrison’s career, from the earliest days of the Beatles, through the ups and downs of his solo career, to his brief but rewarding tenure as a founding member of the Traveling Wilburys. Behind Sad Eyes is a fairly short book, but despite this, Shapiro manages to be quite thorough. He explores the dynamic within the Beatles with considerable depth, explains the etiology of each step of Harrison’s solo career, and conveys both the fun and the deeper significance of the Wilburys and Harrison’s other all-star efforts.

Shapiro’s inclusion of the Wilburys as more than a footnote is significant. Most people who talk or write about the career and life of George Harrison tend to overlook the Wilburys, or mention the group only in passing, acknowledging their existence but dismissing their significance. I can think of two reasons for this all-too-common oversight. First, the Wilburys never attained anything close to the pop-icon status of the Beatles. Second, the Wilburys’ intention had been just to have fun; they were always the first to admit that the ideas of “serious music” and “Traveling Wilburys” were antithetical. The erroneous conclusion is that Wilbury music therefore does not merit mention. Of course, such an attitude would be a mistake, not only because the music is damn good music, but also because even if he entered the venture as a lark, the Wilburys marked a turning point for George Harrison, both as a musician and as a person—after laboring in the shadow of his fellow Beatles and then using music as a medium for cynicism, rebellion, and spirituality, Harrison finally re-discovered a secret he had long forgotten, that music can be a joyful, playful, raucous experience if you surround yourself with friends and set out to have a good time. The result of this positive attitude is electrifying—Harrison’s voice never sounds more ecstatic than when he’s singing as a Wilbury. Take “Heading for the Light,” for example, in which Harrison complains “I wandered around with nothing more than time on my hands.” This could be read as a complaint about his frustrating time with the Beatles, but Harrison prefers to focus on the positive, as he goes on to assure his listeners that he is now “heading for the light.”

But forgive me; my delight in finding that Shapiro gives the Traveling Wilburys their long overdue credit has caused me to digress. The point is that, in the context of Behind Sad Eyes, inclusion of the Wilburys makes perfect sense. Shapiro wants to explore George Harrison the Man and George Harrison the Musician. His examination of Harrison’s musical evolution is neither heady nor sophomoric; rather than delve into technical dissertations on notes and melodies, he finds explanation for the varying degrees of Harrison’s artistic and commercial success by viewing his musical accomplishments within the context of his emotional and spiritual development. As a result, Shapiro comes across as a man who, through simple observation, seems to understand George Harrison the Musician infinitely better than most critics and journalists.

Yet if George Harrison the Musician was often triumphant, George Harrison the Man was sometimes a wreck. Drug addictions, manic-depression, cancer, and a paranoia that only increased after Lennon’s murder, plagued Harrison to no end. As someone who simultaneously worked a career that demands a literal spotlight and insisted on a private life of quiet solitude and spirituality, George Harrison was both the ultimate example and the ultimate denial of the “sex, drugs, and rock ‘n’ roll” stereotype. But Shapiro’s book is no tabloid, nor does it ever fall back on old Behind the Music -style melodramatics. He explains how for Harrison, the tragedies and the triumphs were intertwined and helped form an ultimately complete human being.

For whom is this book intended? That’s a difficult question to answer. Behind Sad Eyes never assumes reader knowledge (even if you’ve somehow never heard of the Beatles, you’d feel like you know them personally after reading this book), but it also never wastes the reader’s time with textbook-style explanations. Instead, characters and situations are simply presented as they occur, and the result is a fluid narrative that reads like a well-crafted novel. So whether you’re a Beatlemaniac who knows all the trivia, a musical novice who doesn’t know Wilburys from Wings, or, like me, just a casual, curious admirer of Harrison’s music, you’ll find Behind Sad Eyes to be a humorous, informative, touching, and delightful read. It’s only a shame the man himself is no longer around to give it his seal of approval. But perhaps, now that the Quiet Beatle has been finally, tragically silenced, Shapiro’s book will give him one last chance to be heard. Rest in peace, George. Rest in peace.